This is about those remembered on the headstones of Ynys St Tysilio who had involvement with the Great War of 1914 – 1918, the Second World War of 1939 – 1945 and other conflicts.   Some were lost in war; others were civilians who kept the town going, including H Harold Hughes the Architect who designed the Cenotaph. There are many others commemorated on the Cenotaph who are not mentioned here. 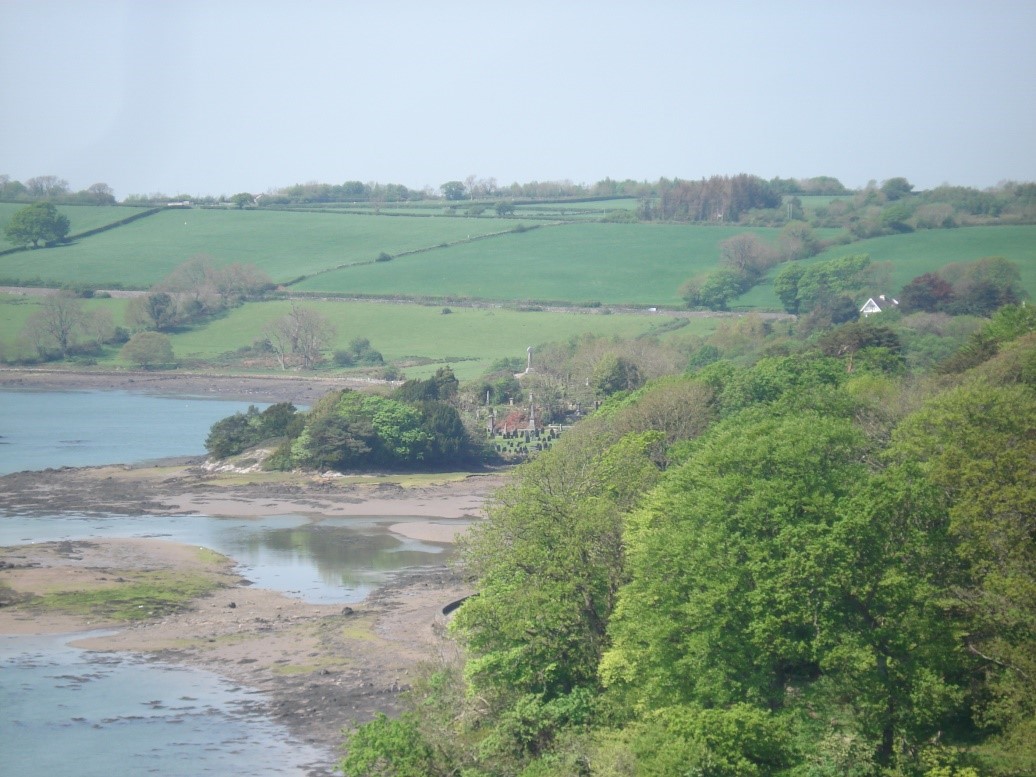 St Tysilio Burials and Commemorations connected with WWI and WWII:

There are 8 official Commonwealth War Graves Commission burials here, 7 from the Great War and 1 from WWII, all marked ✿. Others are commemorations and burials for people who contributed to public life. Where there are inconsistencies in date and spelling, I have transcribed faithfully.

The title line for each person is the wording on their headstone.

Enter through the large gate, walk to the left and follow the unofficial path to the far corner of the churchyard, on your left – in the furthest corner, CWGC slate headstone with RWF badge

Return to the path and walk back towards the gate, opposite the steps, on your right, ‘IHS’ design

2 – In Loving Memory of Elizabeth Williams . . . Also Lance Cpl. J. J. Williams, Son of the above

John James Williams, Lance Corporal 17th Battalion Manchester Regiment - lived in Hirael, Bangor; worked as a Gardener on the Faenol Estate; had been wounded and treated in hospital in Leeds; returned to the front, taken Prisoner of War, died there 9th October 1918; buried Hautmont Communal Cemetery

Walk up the steps and to the gravel path, slightly to the right, CWGC slate headstone, 3 feathers

Left, on path towards the sea, and on your left, CWGC slate headstone, sphinx

Veer off into the mass of headstones, slate headstone with weeping palm and much writing on it

Walk through the graves, towards the water, double size kerb grave with headstone

6 - In loving memory of Owen Jones . . . In fond remembrance of dear Tysilio

Behind above headstone and directly behind slate bench, a stone slab with a cross

In memory of Harriot the wife of Lt. Col. Capel Sandys who died Dec. 20th 1864 - Also in loving memory of Mary Anne Blanchford - widow of the late Richard Norman and daughter of the late Colonel A. G. Sandys - Who died the 2nd September 1913

Rejoin the tarmac path, turn right, look carefully on your right, a very small kerb grave, headstone lies flat, cross on grave, not next to path

Next to path, slate, round topped headstone, decoration of clasped hands

Next to the path, double kerb grave in granite, cross lies flat

12 – To The Dear Memory of Frederic William Turner . . . Emmeline Shutt

Emmeline Shutt (née Turner) of Cartrefle, married in 1913 to Herbert Cecil Shutt (known as Cecil); she worked as a VAD (Voluntary Aid Detachment Nurse) during the war, in Holyhead. ‘F. W. Turner’ served on the War Heroes’ Memorial Committee for Menai Bridge. They raised money and ensured that the St Tysilio Cenotaph was built.

This grave faces their house, Cartrefle.

Next to the path, slate headstone with kerb, cross and anchor design

13 – In Affectionate Remembrance Of Thomas Owen . . . Also of their dear Grandson, Tono

Thomas Williams, Private 4195693, 1st Battalion Royal Welch Fusiliers - son of John and Maggie Williams; was part of a force sent to the Arakan (Burma) with orders to overwhelm Donbaik held by the Japanese, a bloody battle which failed; after the war Field Marshal Slim said of the RWF that ‘they showed valour which has rarely been surpassed’; died Thursday 18th March 1943; age 22; commemorated Rangoon Memorial

Next to the path, double kerb grave, slate headstone decoration of vertical lines and tulips

Albert Evans Jones (Bardic name Cynan) served in the Royal Army Medical Corps – educated at Grammar School Pwllheli and University College Bangor; Bala Theological College after the war; teacher, preacher and poet; he wrote about his experiences in the war; he is known for updating the organisation and ceremonies of the Eisteddfod Genedlaethol (National Eisteddfod)

Next to the path, double grave with slate headstone and kerb, white chippings

16 – In loving memory of my dear husband . . . Also of his beloved sons Willie and Harold

William Henry Jones, Serjeant 31st Battalion Royal Welch Fusiliers – husband of Ann Mary Jones; during 1939 – 1945 boarding houses and hotels on the Isle of Man were used as an internment camp for civilians without British passports, also there were several bombing and firing ranges on the island; killed by accident in an artillery training exercise Tuesday 2nd November 1943, age 34; buried Douglas Cemetery, Isle of Man.

16a - WWII - Harold Harlan Jones Able Seaman Royal Navy, HMS Hood; a career RN man, it had been his ambition as a boy to sail on the Hood; British naval ships were sent to intercept German battleships as they left to attack the convoys in the Atlantic, Hood was hit by shells from the Bismarck, one fell through a turret into the magazines below decks; it took HMS Hood 3 minutes to sink, from a crew of more than 1,400 men, 3 survived; died Saturday 24.05.1941, age 20; commemorated Portsmouth Naval Memorial.

Turn right at the tree up the grass path, 2nd row on right, slate headstone and kerb with slab

Richard Robert Williams, Private South Wales Borderers 4th Battalion – had worked at the Anglesey Arms Hotel, in Liverpool and at the Sunlight Soap factory on the Wirral; he was killed in action 12th August 1915, age 19; commemorated Helles Memorial, Gallipoli

William Jones, Ordinary Seaman Royal Navy, HMS Botanic – had been requisitioned by RN for use as a Minesweeper; one of the ships to evacuate troops from Dunkirk beach in June 1940; September 15th 1940 was in Dover harbour when bombed by a German aircraft, 6 crew killed

20 – To the Dear Memory of H Harold Hughes

Henry Harold Hughes (known as H Harold Hughes), Architect and Diocesan Surveyor for Bangor, author of books on old cottages and churches of Snowdonia; visited and wrote about a military hospital in France; designed the cross that is the war memorial on St Tysilio

Back on path going up hill, 6th headstone along next to path

Continue up grass path, turn right onto another grass path and turn left (towards the tree) 3rd grave on your left. A double kerb grave with scroll tablet

Kenneth Lloyd Ellis, commemorated in Barmouth as well as Menai Bridge; he married Margaret Williams in 1939; served with the Royal Welch Fusiliers 4th Battalion; was present when they returned to France as part of D Day invasion (landed 28th June 1944) and fought their way through France towards Belgium; killed in action in Normandy; buried in Brouay War Cemetery, near Caen

Return to the ‘crossroad’, return the same way you came up; 3rd headstone on your left (you are looking at the back of it) polished granite with rough stone pillars, writing now unclear - between graves for ‘Christmas’ and ‘Mary Ellen Evans’

‘Bob Bwlch Glas’, joined the Welsh Guards in May 1939 (before war was declared); had been working as a Radio Engineer; Welsh Guards embarked for France on 21 May 1940, evacuated midnight 23 May (‘Dunkirk’); returned to France 28th June 1944, as part of the ‘D Day’ invasion to push the Germans out of France and Belgium; killed in action 25 July 1944

Continue on path towards church, on your right, 2nd row in, tall headstone with crossed rifle and sword

Thomas Rainforth, a professional soldier, son of a professional soldier who had fought at Waterloo; Thomas served with the 24th Regiment of Foot (South Wales Borderers after 1881); he fought in the Kaffir war 1877-78, Zulu war 1879, Battle of Ulundi; should have been in command at Battle of Rorke’s Drift, but message went astray

Continue to tarmac path, on your left and next to path, slate headstone and slate kerb with slabs

Menai bridge lad, played Centre Half for the Tigers football team, Captain in the year they won the North Wales Cup; worked for John Edwards Timber Yard (Porth Wrach, now dwellings) in the offices and then as salesman; volunteered for RAF in WWII, served as a Navigator in Vickers Wellington bombers; parachuted out 3 times (Member of Caterpillar Club “Life depends on a silken thread’), once to Bethesda, Snowdonia when he persuaded the Police to allow him to visit his parents; returned to John Edwards after war; married Kathleen from Birkenhead, they moved to Cheltenham where he was salesman for MacFarlane Langs (biscuits); died age 44, in 1965.

29 – In Loving Memory of Gracie Wife of John Robert Davies

Mrs Gracie Davies née Habershon of Ceris – married to John Davies, eldest son of Richard Davies of Treborth; sister of Herbert Habershon, surgeon to Gladstone; she organised a Welsh Industries Association shop where needlewomen could sell their work; Assistant Commander of the Red Cross military hospital at Bodlondeb; ensured that there was money to pay the Belgian refugees who worked on the ‘Belgian Promenade’; Mentioned in Despatches

29a – In Loving Memory of Catherine, Wife of Dr. S. H. Habershon

Catherine Habershon née Davies - third of nine children to Annie and Richard Davies of Treborth; married to Herbert Habershon, medical specialist (brother of Gracie, above); mother of Cyril, Kenneth and Leonard; all served during the war, both Kenneth and Leonard killed in action

29b – And of Annie Mary, Eldest daughter of Richard Davies Treborth

WWI - Annie Mary Davies, eldest daughter of Annie and Richard Davies of Treborth - sister of Captain Arthur Davies 1st/6th Battalion Royal Welsh Fusiliers, who died 10th August 1915 at Gallipoli, age 38; there was doubt about his death, she visited Egypt in September 1915 to look for him in the military hospitals; she visited Gallipoli in 1928 to see where he had fought

Top of the steps, turn immediately right and look in the corner adjacent to the path, CWGC burial, family slate headstone with weeping palm tree design

William Owen Davies, Private Royal Welsh Fusiliers 3rd Battalion – injured in action, was on ‘Home Service’ in Limerick, Ireland where he contracted flu from which he died on 6th June 1918; had a full military funeral

William Alexander Connington, Corporal Australian Flying Corps (originally ‘The Flying Squad’) – nephew to Rebecca Connington of Gwynfryn; a Fitter and Turner before the war; trained as an armament fitter for aeroplanes; did not have robust health, caught flu, died in Aylesbury, age 23; was given a full military funeral

His first cousin, Mary Connington served as a VAD (Voluntary Aid Detachment nurse) during the war. Ernest Victor, Mary’s brother, signed up with the Canadians under an assumed name, later reverting to his own name; survived the war; probably died in Canada in 1964

Philip Corliss Gannaway, Lieutenant Royal Naval Reserve – married Alice Muriel shortly before leaving New Zealand; worked as a Surveyor in Hamilton; served on the Patrol Boats on the Strait; died from flu, age 32; he was given a full naval funeral, work stopped in the naval shipyards bordering the Strait for them to pay their respects as his coffin was taken past by boat

Next row away from Cenotaph, CWGC slate headstone

David Jones, Private South Lancashire Regiment – married to Annie, lived at 4 Well Street; a Butcher at Penrhyn Port before the war; was given a full military funeral

Double kerb grave in furthest corner of this area (away from Cenotaph), lettering on kerb

Turn back and slightly left; headstone, scroll design with lead inset lettering (now in poor condition) poppy to and ivy decoration on pillars

And, in Menai Bridge Cemetery on Ffordd Caergybi (A5):

Facing as you enter cemetery, first row of central plot, polished granite on rough stone base

Thomas Robert Chambers, 2nd Radio Officer Merchant Navy, S.S. Arakaka – educated Friars School in Bangor; a career Merchant Navy man; Arakaka had been chartered by the Ministry of Defence as a Weather Ship, she took meteorological readings of surface and upper air; there had been an unwritten rule that weather boats would not be attacked, however, in May 1941 a German weather boat was captured by the British, they took Enigma machines and code books; sinking of the Arakaka might have been a reprisal; lost 23rd June 1941; commemorated Tower Hill Memorial, London