In this edition, we have an update on Steve and Nancy’s pilgrimage, and a couple of book reviews for you, one of which is only 95 years late!

After our longest self-imposed break, this Sunday Nancy and I leave for France and the next chapter of our Pilgrimage. En-route, we pick-up our new(ish) caravan, together with an inflatable awning, which hopefully will make things a little bit easier, especially the caravan “mover”.

After Sunday night in Folkestone, we then travel on Monday to our campsite for 26 nights at Aubencheul au Bac, a few kilometres north of Cambrai, on the main route to Douai. From here we intend to complete around 141 visits, all but 15 within the department of Nord. The remainder are from the department of Aisne (north of St. Quentin), which are remaining from last July. Nord has the most concentrated number of burial grounds of any department: 256 from 1918 alone! So, even after this tour, we will need to return to this sector.

Unlike the last few years when we virtually lived in France, this time we have had to plan almost every day as a “visit day”, planning each day to maximise the numbers visited, whilst trying to prevent wasting mileage.

Although our proposed visits cover the fighting of Byng’s Third Army and Birdwood’s First Army* of late September, through to mid October 1918, the battlefields traverse the Cambrai battlefields of November/December 1917 and Le Cateau from August 1914. Many of the Cambrai casualties of 1917 were later concentrated into 1918 burial grounds. By error in 2012, we completed many of the 1918 burial grounds around Le Cateau which again were used to concentrate these early casualties, therefore we don’t expect to see many 1914 casualties.

The fighting of late September, through to the Armistice was one of movement, with each army corps rapidly moving its divisions in and out of the line, to keep up the pressure on the retreating enemy. Only six additional burial grounds were made after the Armistice, indicating that divisional burial officers were responsible for the vast majority of the smaller communal cemetery burials. I am expecting to see small groups from the same battalions - with similar dates - in these cemeteries.

*Without getting too specific about army boundaries, Cambrai was the left flank of Third Army and the right flank of First Army. Our remaining visits north of St. Quentin were in Rawlinson’s Fourth Army sector. (See the map below for details). 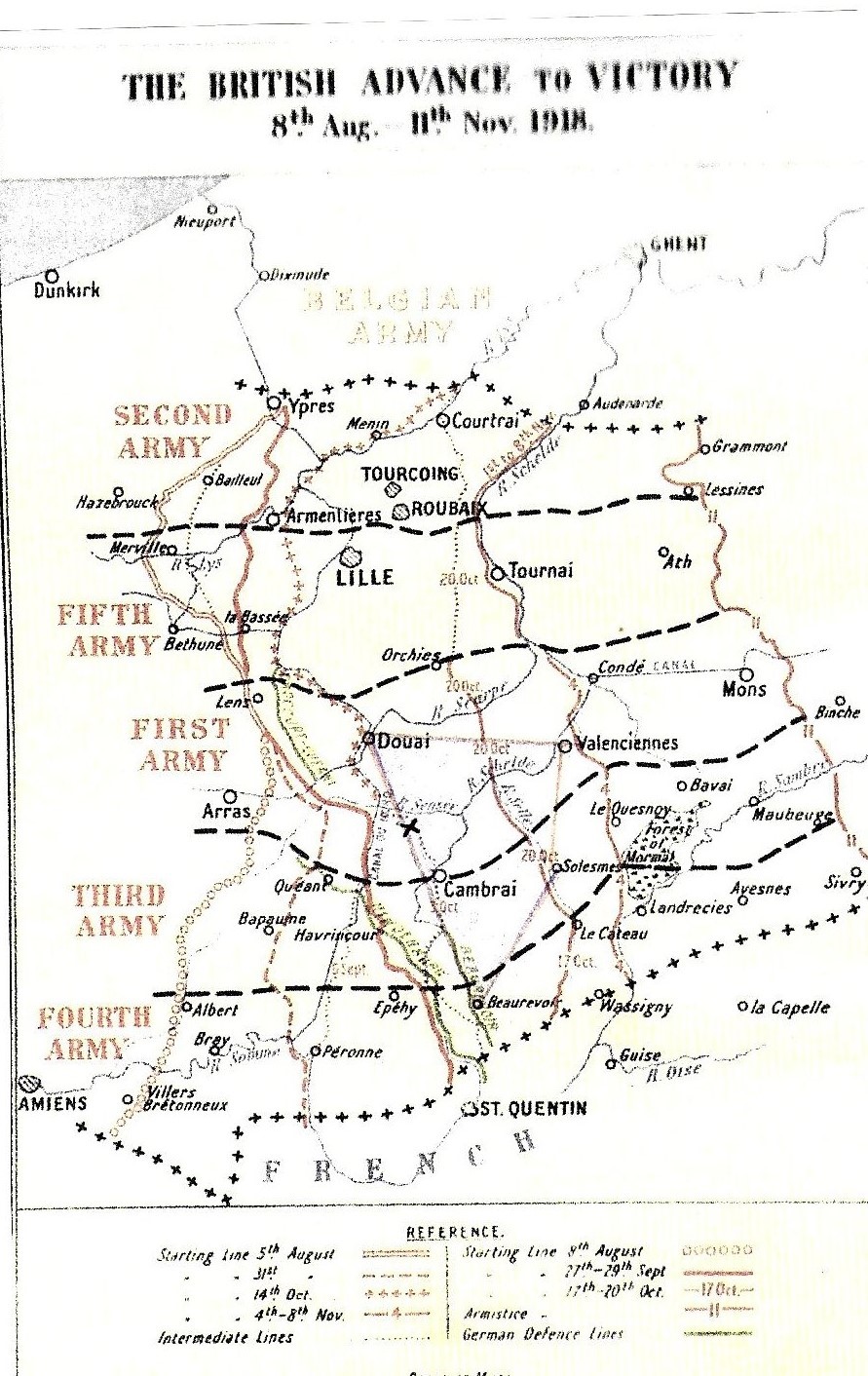 Our visit sector. Bordered by Douai (north), Valenciennes (east), Solesmes (south east) and Beaurevoir (south). Our campsite is marked with an X

On Secret Service East of Constantinople

A few months ago, I wrote a review of John Buchan’s Greenmantle. This book tells the true story of the men and events who inspired that tale. It is remarkable in its theme, scope and readability.

Hopkirk considers that the declaration of jihad posed a very real threat to British rule in India and that maintaining and extending their empires was a prime concern of politicians in Britain, Germany and the Ottoman Empire. While it should be remembered that he is a journalist by training rather than a historian, he has extensive first-hand knowledge of the countries he describes and, from the bibliography, his research has been extremely thorough. In addition, he can tell a rattling good adventure story!

Anchored in a sound basis of the military and political context, Hopkirk, in fact, tells a series of adventure stories. His heroes are mainly intelligence officers and political agents, both British and German. Most were recruited because of their extensive knowledge of the areas in which they were to work, having been diplomats, business men or archaeologists. Most spoke several local languages, were highly intelligent, brave to the point of being fool hardy and definitely individualistic. They would not have fitted into the military mould, but, working more or less as spies and agents provocateurs, they were without equal.

The first part of the book deals with the race by German agents to raise Afghanistan to join the Turks in jihad and invade India to support the thousands there who would rise in response to the Indian revolutionaries whom Germany was also supporting. Their progress was tracked and opposed by a network of British agents and informers throughout Persia. It is remarkable how freely Germany and Britain pursued the war across supposedly neutral Persia! Diplomats such as von Wangenheim, German agents like von Niedermeyer and Wassmuss, Indian revolutionaries like Savarkar and Dayal are shown as real three dimensional people as Hopkirk traces the way their disparate stories interlink.

The later section of the book deals with the even less well known areas of Transcaucasia, Transcaspia, Turkestan and the complex, constantly shifting relationships between Christians and Moslems (and the local groupings within each of those religions) and the various categories Russian revolutionary. Despite British progress in Mesopotamia, in late 1917 and 1918 Enver continued to pursue his dream of a Turkish empire in the Caucasus, extending into Russian territory. To the government of British India, this opened the threat of invading India by the back door. Without spare troops to mount a campaign in this area, Britain sent several small forces to support and train local militias to resist the Turks, and British political agents and intelligence officers travelled the area smuggling gold and roubles to arm the most promising groups. The stories of General Malleson’s Malmiss force and of Dunsterforce are told from the perspective of the political agents and intelligence officers who supported them. Among others, these include Ranald MacDonell and Reginald Teague-Jones. MacDonell had been vice-consul in Baku before the war. He also understood the explosive nature of Caucasian tribalism, as he was himself head of the Scottish Highland Glengarry clan. As a teenager, Teague-Jones spent several years at a German run school in St Petersburg. Fluent in French, German, Russian, Persian and several other Asiatic languages, he worked for the elite Foreign and Political Department of the British Indian government before being transferred to military intelligence early in the war. Having survived multiple adventures, after the war he was falsely accused by the Russian government of ordering and participating in the murder of 26 Bolshevik commissars and had to change his identity. Hopkirk managed to trace his later career.

Using all the skills of investigative journalism to unearth the stories of all these men, Hopkirk has brought them to life. Complex and detailed, this book is so well written that it makes compelling reading. It analyses political intent and depicts a theatre of war that bear no relation to the trenches of the Western Front. I highly recommend it.

My interest in the maverick Gordon Shephard lead me to track down a copy of this rare book. It was not easy! The book was published privately by his parents in 1924 and his classmate at Eton, Shane Leslie, edited the letters which are the basis of this work.

Gordon Strachy Shephard was the most senior flying officer to be killed in WWI. It was still the RFC at that stage, as the RAF did not come into being until 1st March 1918. He died on 19th January 1918 in a flying accident and is buried at La Pugnoy CWGC cemetery, west of Bethune. I have been there on two occasions. At the time of his death he was a Brigadier General and was 32 years old. The book claims he was the youngest British Brigadier-General but I think that distinction belongs to Roland Bradford? Shephard had been awarded an MC and a DSO.

The book is composed of extracts from his letters, with commentary from Shane Leslie to put them into context.

Before the war, Shephard had been a regular army officer. He was an avid yachtsman and made some very adventurous voyages, including from the UK to St Petersburg and up to the northern shore of the Gulf of Bothnia. He made notes and sketches of emplacements along the German-Dutch coast, and managed to get arrested in Germany for a few days. However, the War Office response to the information he provided varied from lukewarm to decidedly bad-tempered. It was through his love of yachting that he met Erskine Childers. During WWI, Childers was a Lieutenant-Commander in the RNVR, involved in flying boat operations to try to obtain intelligence on the German fleet.

Shephard and Childers made several sailing trips together. Childers of course wrote the ultimate yachting story, and indeed an early spy novel, The Riddle of the Sands. During WWI, many of Shephard’s comrades thought him to be the hero of this book, but in fact it was published in 1903 when Shephard was in his last year at Eton and had not met Childers at that stage. The culmination of their sailing adventures was the gun-running using Childers’ yacht The Askard to bring German guns to Dublin for the use of the Irish Volunteers in July 1914. In many ways, they were acting out The Riddle of the Sands. This episode in Shephard’s life is totally ignored by the CWGC!

Shephard learnt to fly privately before WWI, and this was the basis of his transfer to the RFC, ie he was already a trained pilot.

Well, I have reproduced below a few of the pages of the book from 1915 which perhaps give some insight into his pragmatic and nonchalant attitude to the army, life and the dreaded War Office. I hope to put a talk together on him before too long. What a character!

Hamilton was the general who, rightly, decided to evacuate Gallipoli and, unsurprisingly, was severely criticised by Churchill.

Howth refers to the Dublin gun-running for the Irish Volunteers. Howth is the promontory to the north of Dublin Bay. 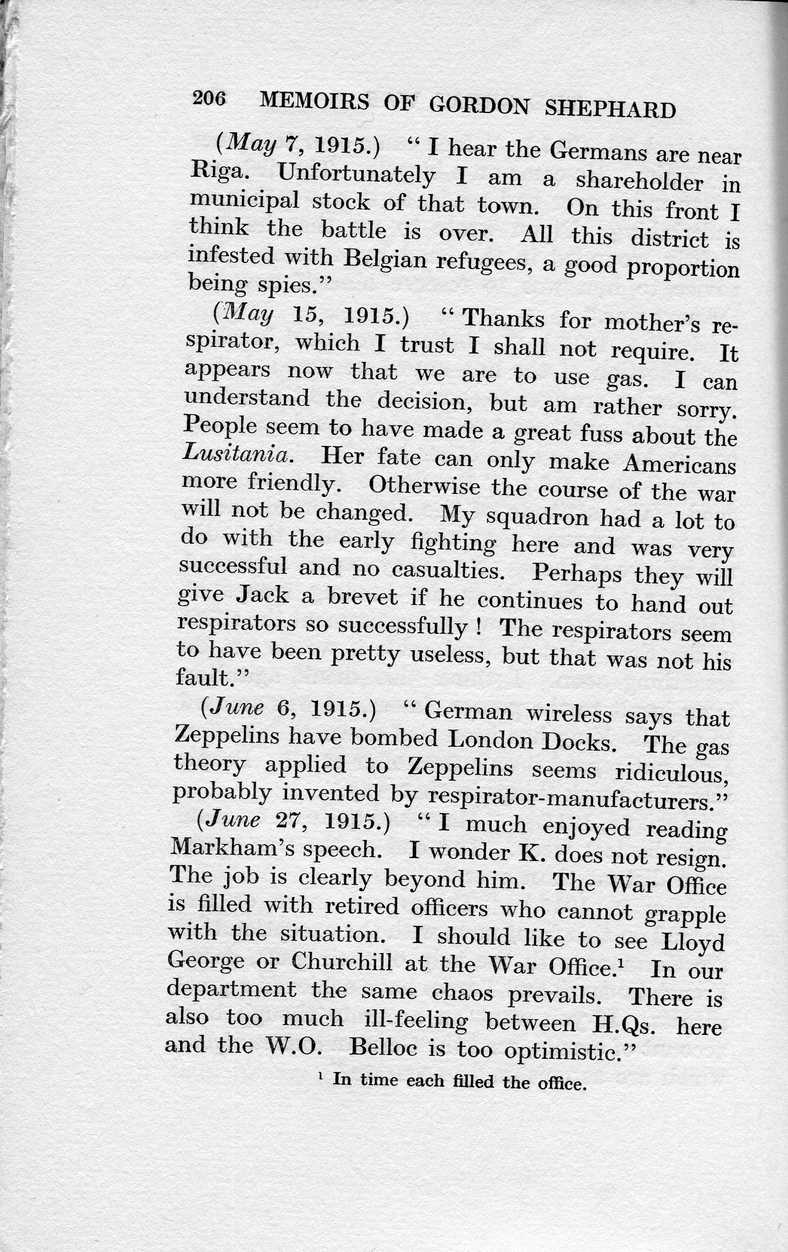 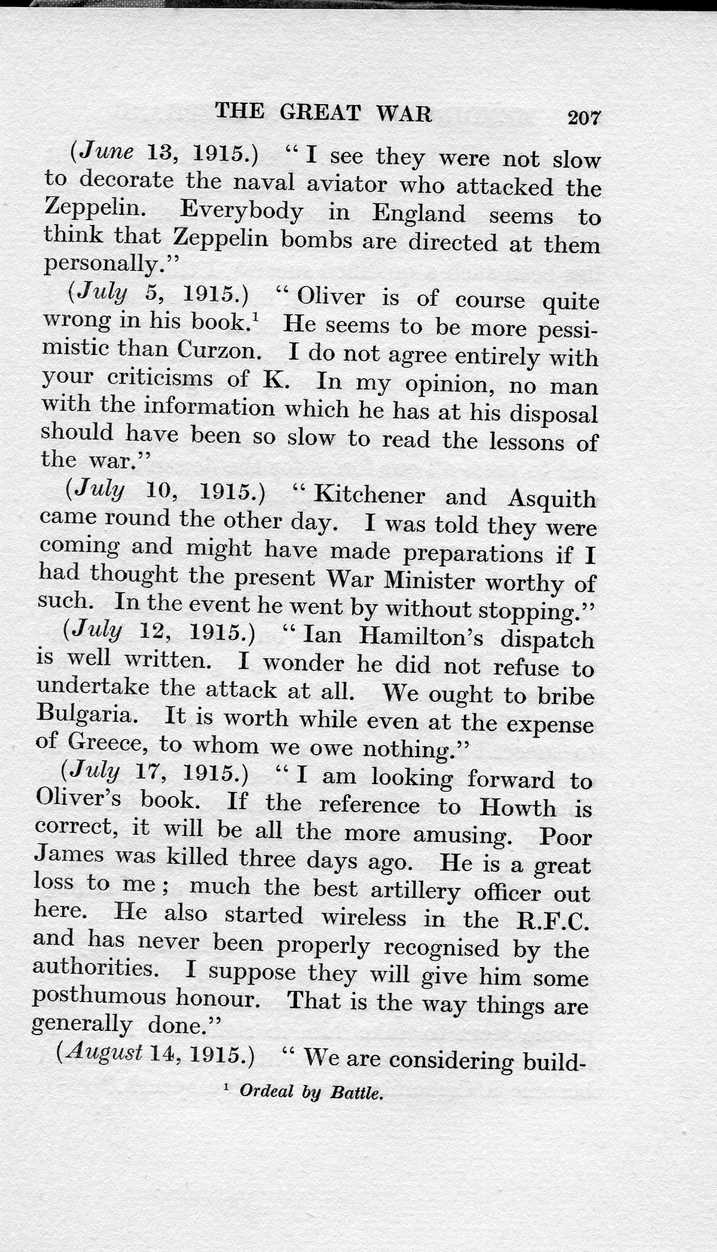 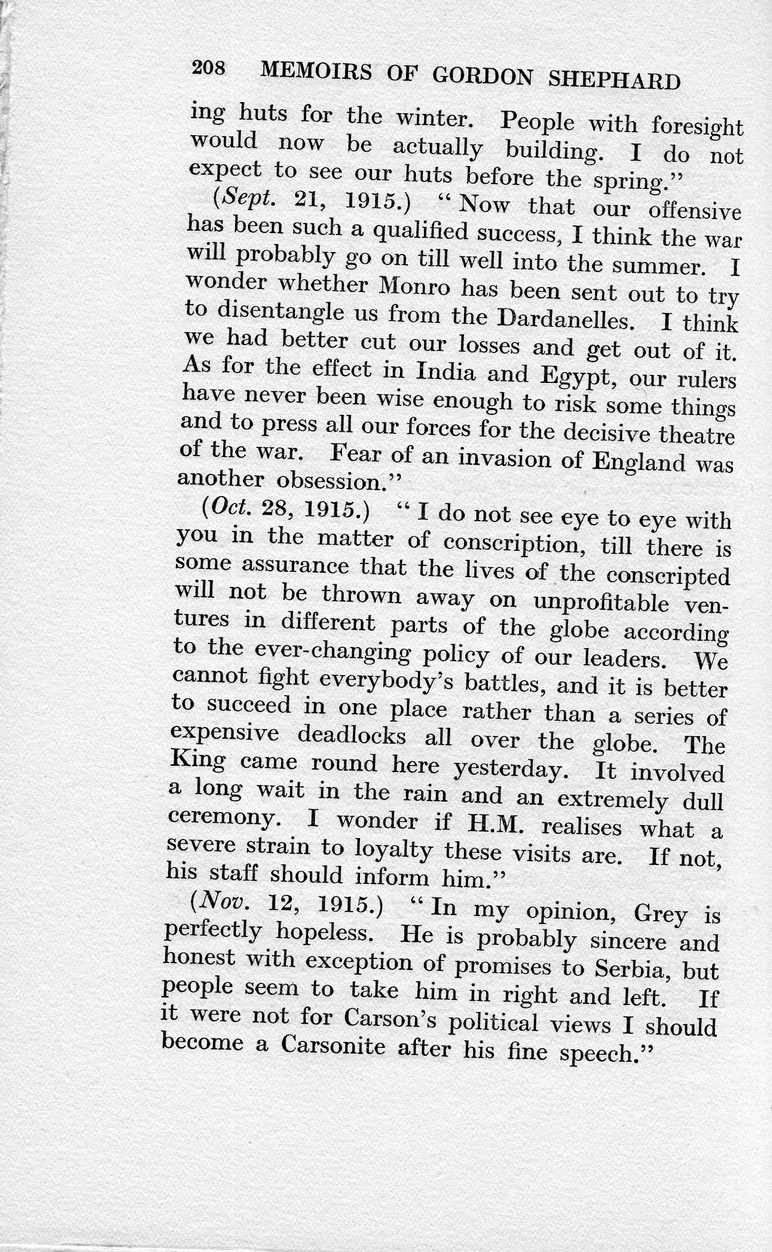