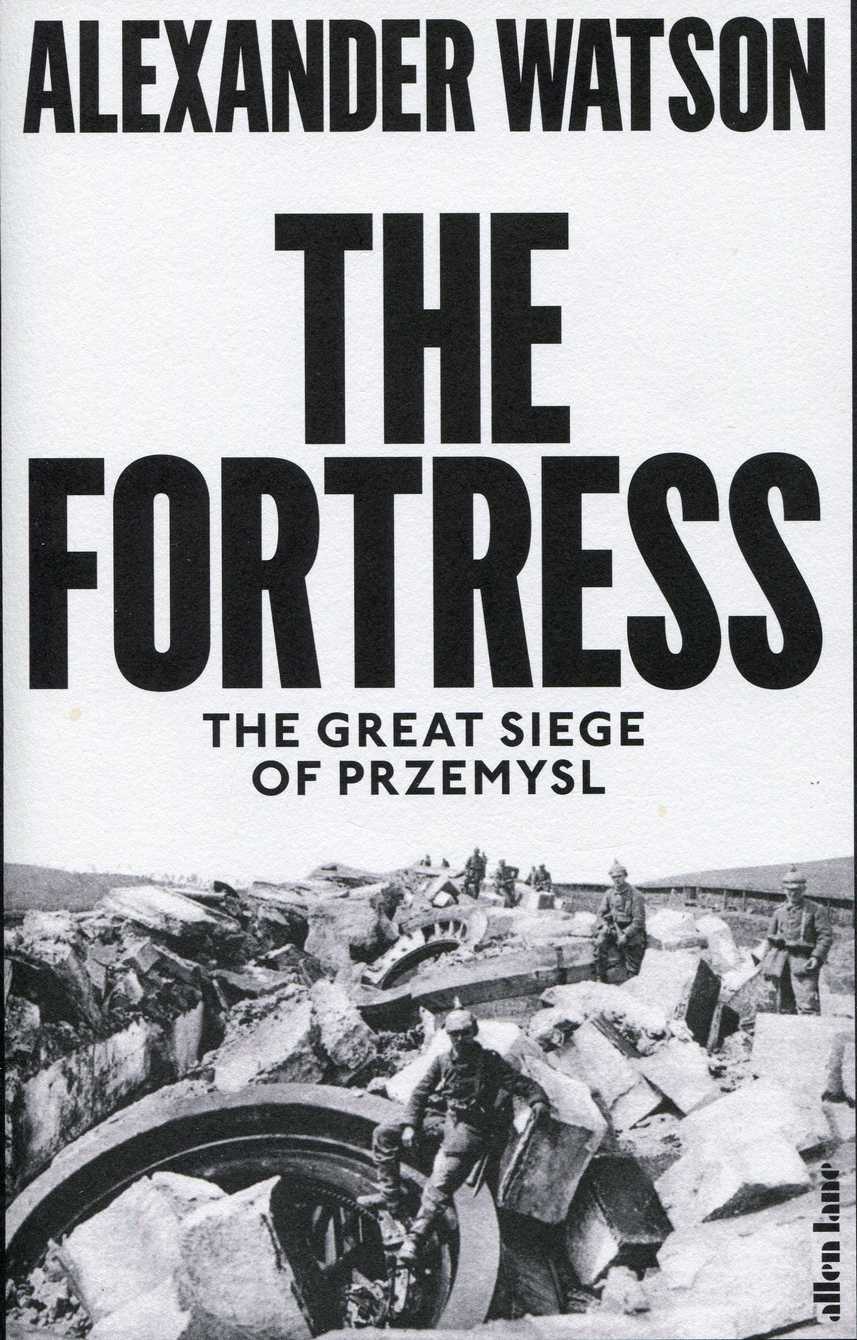 The Fortress – the Great Siege of Przemsyl

Alex Watson is professor of British History at Goldsmiths College in London. He is a wonderful speaker and, if you get a chance to hear him, grab it.

This book is the only one, certainly in English that I know of, which deals with events surrounding the events at Przemsyl in 1914-1915. Today Przemsyl is on the Polish-Ukrainian border. In WWI, it was part of the Austro-Hungarian Empire, Galicia, and the fortress was intended as a bulwark against the Russians. The borders of Galicia, where it lay, were rightly considered to be indefensible, so the defensive plan was to fall back to Przemsyl and the defensive line of the River San. Przemsyl would have been known by its German name of Premissel, which is at least easier to say, unless you are Polish.

Indeed, the word fortress is a misnomer because, like Verdun, it is a complex of major forts and small outposts surrounding the town. Some of outposts lie today in the Ukraine. However, unlike Verdun, it was never modernised either in terms of its armaments or in terms of reinforcing the structure to withstand modern artillery. The saving grace turned out to be that the Russians did not have the heavy siege mortars like those which the Germans deployed against the forts at Verdun and Liege. Indeed, many of those siege mortars will have been produced in Austro-Hungary at the Skoda armaments factories at Pils.

There were two episodes of siege, as the fortress held out as the Hapsburg armies retreated west in the face of the Russian advance, and then with the ebb and flow, it was relieved and besieged for a second time, more effectively and finally. The siege ended because of the garrison running out of food, notwithstanding having eaten most of the horses, and having to surrender. The Austrians maintained that it was the only siege in WWI where the defenders were not defeated, but if you are starved out and have to surrender, that is hardly a triumph.

As well as the casualties in defending the fortress itself, there were huge casualties suffered in the field armies fighting in Galicia, trying to fight the Russians and/or to free the fortress. There was associated fighting in the Carpathian mountains over the winter of 1914-1915, again with huge losses on both sides. All in all, the major losses sustained by the Austro-Hungarians and the Russians at this early stage in the war greatly limited their actions thereafter. Austro-Hungary eventually needed help from Germany. Russia was not able to push westwards into Austria and Germany, as it could have done, but for the siege at Przemsyl.

The book deals with the bizarre structure of the Austro-Hungarian army, with its 11 languages and innumerable dialects. The Jewish soldiers were an important resource in this regard, as they will have spoken Yiddish, as well as the local language of the area where they were from.   Yiddish is a German dialect, so German-speaking officers used the Jewish soldiers as translators into, say, Polish or Slovak or Hungarian or whatever was the language of that regiment.

As regards the local populations, there were murders and pillaging especially against the Ruthenes, by both sides. Ruthenes were distinguished by their religion of Greek Catholic Christianity. The Austro-Hungarians saw them as being sympathetic to the Russians and the Russians saw them as being renegades who were not “proper” Russian Orthodox Christians. The Ruthene population has largely emigrated from this region today.

My personal hobbyhorse, not only with WWI but also European history generally, is the way that Russia is ignored. It is, after all, the biggest country in the world. This book certainly helps to correct that by bringing to attention this virtually unknown, but very important, episode of WWI.

The author has also written a book on Germany and Austro-Hungary in WWI, which is huge but with his easy-going writing style, it may well be worth trying.  Postscript - having now read "Ring of Steel", I can thoroughly recommend it.  In fact, some 250 pages are references, so the actual text is 550 pages, and with the author's lucid style it is easy to read.