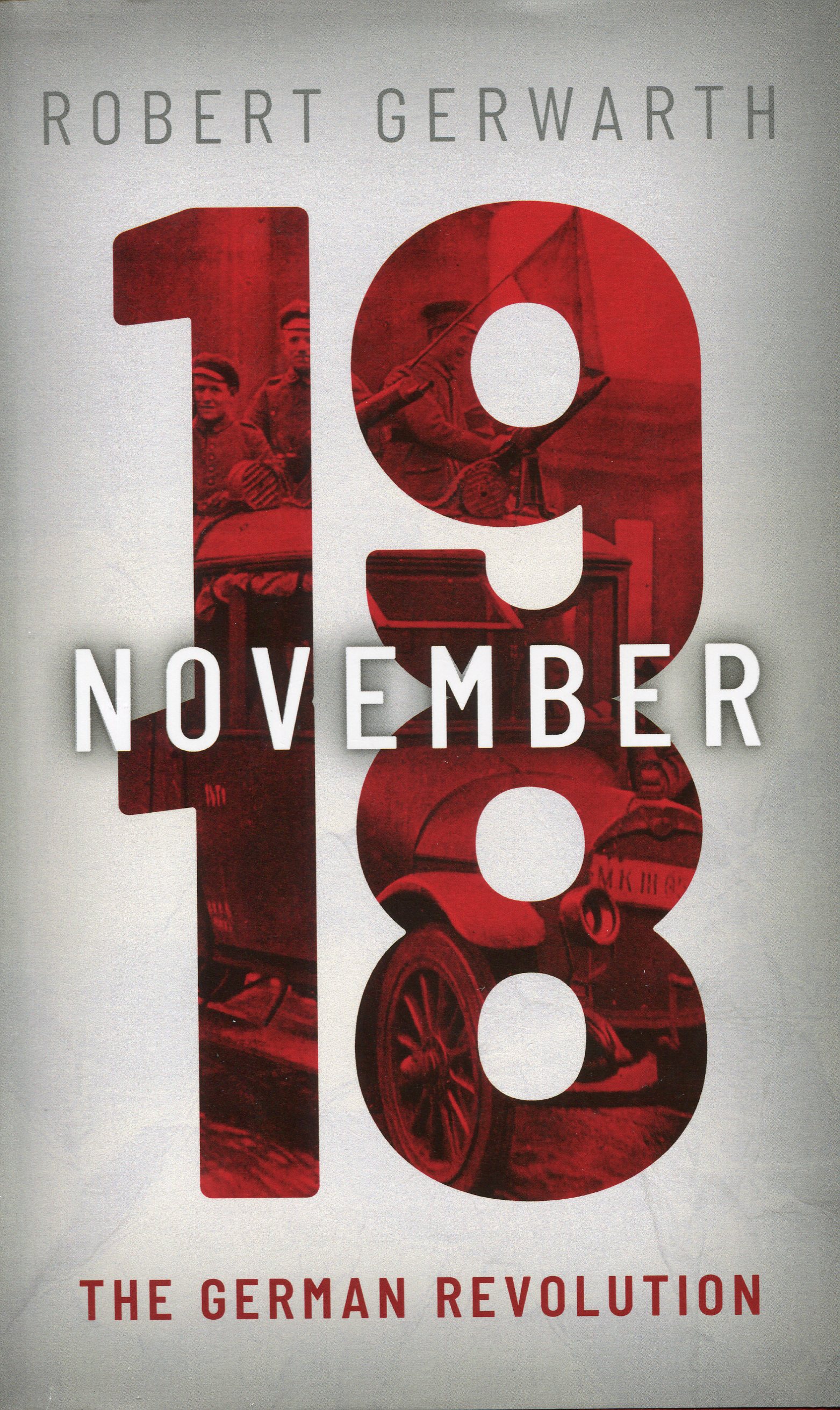 Robert Gerwarth is the Professor of Modern History at University College Dublin. His area of study is German history in the 19th and early 20th century. His PhD thesis was on Bismarck and it is published as The Bismarck Myth. He has also written on the central European, and wider chaos, resulting from WWI in The Vanquished: why the First World War failed to end.

The current book is, like his other work, superbly written and very readable. In fact, it covers the last stages of WWI, so including the period just before November 1918.

The political manoeuvres leading up to the eventual armistice are described. The German government had contacted the Americans on 3rd October to request a ceasefire. It was hoped that the basis for this would be President Wilson’s fourteen points presented in January 1918 and then in his Mount Vernon speech in September 1918. However, Wilson’s second response of 14th October was much harsher than his initial one of 9th October, and included regime change. This later attitude was due to, firstly, the mid-term congressional elections in the USA where the Republicans criticised Wilson’s Democrats for dealing with an “illegal” German government. Secondly, positions had hardened with the sinking by U-boat U-123 of the ferry RMS Leinster on 10th October with the loss of more than 550 lives, and the scorched earth tactics of retreating German troops in France and Belgium. Thirdly, America’s allies in the Entente had got wind of the German approach to Wilson and were unsettled by his initial moderate response. So, the tone of his 14th October note was also meant to reassure France, especially, that their demands would be met. The tone of Wilson’s second note was met with immense disappointment, even by moderates in Germany. However, Wilson’s conditions were met in the end, and on 28th October 1918 the constitution of 1871 was amended so that the country became a constitutional monarchy.

Alas, all this came too late to avert a revolution. This was sparked by material deprivations, strikes amongst industrial workers, and discontent amongst soldiers and sailors. The sailors, it turned out, were a major force on the home front, as that of course is where they were based. The sailors' mutiny and the subsequent spread to Berlin are described and discussed.

The great fear of communist revolution was everywhere in Europe at this period and of course it does happen to some degree in Germany (as had occurred already in Russia). So, there were street battles with artillery in Berlin. In Munich, there was a communist regime in power for months before it was crushed by right wing forces in May 1919, with the loss of 600 lives. Subsequently, Munich became a centre for the far right and was the birthplace of the Nazis. However, the author cautions that German history should not be read from 1933 backwards - that is a major error.

The Treaty of Versailles (and don’t forget that it one of five Paris treaties) was widely perceived as being unjust, not only because of the humiliation of defeat, but also because of the hypocrisy of self-determination being applied to those populations seen as being Entente allies (Poles, Czechs, South Slavs, Romanians and Greeks) but not to those seen as enemies. In the Treaties of Trianon and Sevres, Hungary and Ottoman Turkey were treated incredibly harshly. Even worse than the perceived injustice of all this, was the dividing up of countries of immense ethnic complexity in a process of “self-determination” that was, at best, naïve. In practice, this was an invitation to transform the violence of the First World War into a multitude of border conflicts, and latent or open civil wars.

Versailles made Germany more homogeneous than it had ever been, with the loss of sizeable French and Polish minorities. It also created sizeable German minorities outside Germany, eg Czechoslovakia which had more German-speakers (23%) than Slovaks. The Jews of Eastern Europe were in a most precarious position, being forced into new countries such as the Soviet Union, Ukraine and Poland where they suffered pogroms, leading to immigration to the West, many into Germany. The influx of eastern Orthodox Jews, and also of non-Jewish Russian refugees from the civil war, led to heightened xenophobia and anti-Semitism in the economic depression years in Germany.

To sum up, this book is highly recommended. The author is planning a sequel to it on the years following 1918 in Germany, which will form a sister volume to The Vanquished.