Hello. In this edition, we have articles by Keith on Martin’s talk last month, and a moveable war memorial. Caroline continues her account of the siege of Kut. As ever, I am grateful for the “day by day” material that Jim Morris produces and which he lets us use for the Facebook page.


October 1st - Lord Ninian, 6th Welch and the Battle of Loos (Two weeks in the life of a Welsh Battalion on the Western Front) - Marietta Crichton-Stuart

Martin Hornby came up from Somerset to give us a talk on: “The Padres in the Great War”

First, Martin gave us an overview of the chaplains and their work. The Chaplains Dept. was formed in 1796. The job of the chaplains was to give spiritual and pastoral care to the troops of the Army. In the beginning, it was only Anglican chaplains who joined. The Roman Catholics joined in 1833, followed in 1858 by the Presbyterian church. The Wesleyan church joined in 1881, and finally the Jewish church in 1892.

It was a surprise to Martin how many chaplains were awarded bravery medals. The first Victoria Cross to a chaplain was awarded during the second Afghan War, on the 11th December 1879 to the Reverend James William Adams (24th November 1839 - 24th October 1903 aged 63) of the Bengal Ecclesiastical Dept., attached to the 9th Lancers.

By the time of the Great War, the chaplains department had grown to 380 chaplains in 1914. At the end of the war in November 1918, this number was 3,475. Martin then went on to explain how three chaplains became nationally, and internationally, well known.

In early 1914, he joined the Army Chaplains Dept. and was posted to France. He was awarded his Military Cross for action on the Messines Ridge in 1917 for going into no man's land to help wounded soldiers. During the war he wrote poetry. His two books are “Rough rhymes of a padre” published in 1918 and “More rough rhymes” published in 1919. After the war, he join the Industrial Christian Fellowship and it was while working for them in Liverpool that the Rev. Kennedy became ill with influenza and died. His funeral was held in Worcester where thousands lined the street throwing Woodbine packets onto the passing cortege. He is buried at Worcester St Johns Cemetery.

Philip Thomas Byard Clayton CH MC (12th December 1885 - 16th December 1972) was born in Queensland, Australia. His family returned to England when Philip was two years old. Rev Clayton was ordained at Oxford. He was a chaplain at Portsea from 1910 to 1915. In 1915, he joined the Army Chaplains Dept. and was posted to France. From there he was moved to Flanders. In 1915, he set up an “r&r” centre with the Rev Neville Talbot at Poperinge. This became known as Talbot House and from this came the name “Toc H”. Toc H is signallers’ jargon. Rev PTB Clayton was awarded the Military Cross in 1917. After the war, Tubby became the vicar at All Hallows by the Tower in London. It was from there that he promoted the work of Toc H which became a worldwide organisation. In the Second World War, Tubby became a chaplain on oil tankers. Tubby died in 1972 and is buried at All Hallows London.

He was posted to France were he was attached to the 8th Lincolnshire's. He was awarded his DSO on the 18th October1917, his MC on the 23rd April 1918, and his VC for actions on the 5th, 25th, 26th  and 27th April 1918. Hardy was wounded in action trying to help wounded soldiers. He was transferred down the line, but he succumbed to his wounds on the 18th October 1918. He is buried at St Server Cemetery Extension at Rouen.

Martin said how much courage and devotion to duty these chaplains showed. They were not only in the front line, but sometimes in front of the front line. Hardy is the most decorated non-combatant in WW1.

Martin finished the talk with a recording of the poem “My Mate” by Rev GAS Kennedy, “Woodbine Willie.”

1.The little book Martin spoke of is “It's only me” by David Raw published in 1988 by Frank Peters Publishing Ltd, Kendal.

3.Martin is trying to find Tubby Clayton's citation for his MC.

On a recent visit to the Black Country Living Museum at Dudley in the West Midlands I saw an interesting war memorial, known as Butler’s war memorial (in the photo below). 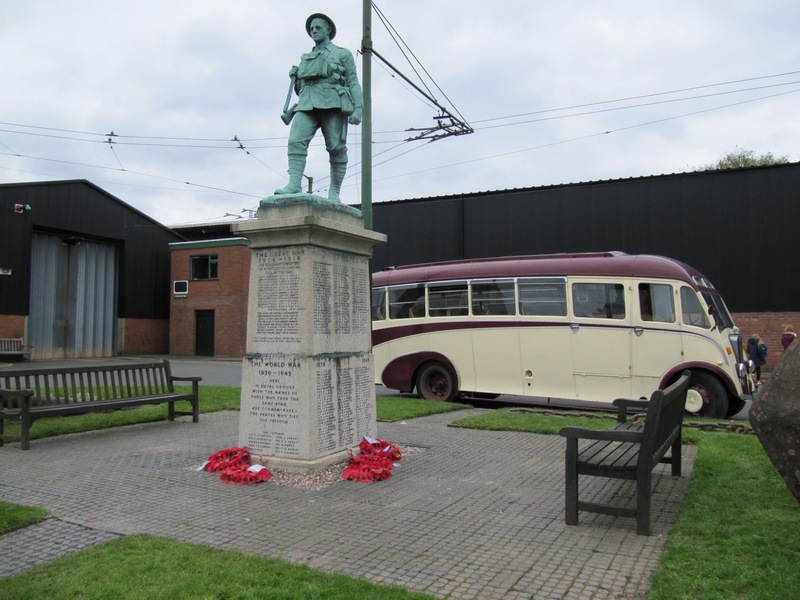 This memorial is situated within the grounds of the museum. This memorial had a life of its own. It was moved several times. The memorial was first erected in 1923 at the William Butler Brewery at Wolverhampton to commemorate not only those who had fallen in the First World War, but also those who had survived.

The bronze figure of the soldier was modelled by the sculptor Robert Jackson Emerson FRBS (Fellow of the Royal Society of British Sculptors), RBSA (21st June1878 - 7th December 1944). He was born in Rothley, Leicestershire. He was a teacher at Wolverhampton Art School. He created the memorial to the 34th Division at La Boiselle on the Somme. Two casts were made from the mould. The second memorial to the 34th Division is at Mont Noir, near Baillieul on the Belgian border.

After the failed attack on the Dujaila redoubt in early March, 1916 (see Dragon's Voice, March 2016), Aylmer was dismissed and General Sir George Gorringe took over command of the Tigris Corps for the final attempt at the relief of Kut. Townshend reassessed the remaining supplies in Kut and issued a revised deadline for relief, 15th April, 1916. Had he revised his estimate sooner, Aylmer could have waited for further troops to arrive before attempting his attack on Dujaila. Would it have changed the outcome? It is impossible to know, but certainly the situation was not helped by Townshend's lack of accurate knowledge of his own resources.

Taking advantage of his success at Dujaila, the Ottoman commander, Khalil Bey, invited Townshend to surrender. He declined, but did ask, in his next report to London, if he could enter negotiations if there was any doubt of Kut being relieved by 17th April. This fuelled the War Committee's fears that an Ottoman victory could spark a pan-Islamic revolt. They were ready to consider any suggestion and Kitchener had two. There had been a number of Shiite rebellions in the Middle Euphrates and he suggested the use of agent provocateurs to encourage further uprisings to force Khalil to use some of the troops besieging Kut to suppress the rebellion. In addition, he thought that Ottoman officials were sufficiently corrupt that a senior Ottoman commander could be bribed to allow Townshend and his men to withdraw from Kut, unopposed. Kitchener asked the Cairo Military Intelligence Office to provide a suitable officer to undertake both missions. Few in the Cairo Office were willing to attempt such improbable tasks but Captain TE Lawrence was willing to try. Lawrence spoke fluent Arabic and, due to his extensive discussions with Arabic Ottoman officers held by the British, he had identified a potential leader for the rebellion, Sulayman Faydi. Lawrence travelled to Basra to meet him and Faydi held lengthy discussions with three other Iraqi Arabists but none of them were convinced the plan would succeed. They did not trust the British or the Bedouin Arab tribes with whom they would have to work. So much for Kitchener's plan for an Arab revolt!

While this was going on, Gorringe was planning his campaign. He had several sea planes which could take off and land on the River Tigris. He used these to assess the development of the flooding which took place at that time of year as well as to photograph the Ottoman positions and used the information to accurately brief his forces. By mid-April, he also had land-based aircraft and airdrops were tried to resupply the besieged garrison. Even though, like many subsequent airdrops, they were of limited success, the attempt must have helped morale within Kut.

The final push started on 4th April, 1916 and continued for most of the month. The seasonal flooding was accompanied by appalling weather, the worst on the 11th April when a thunderstorm was followed by a waterspout, hail and hurricane. The Ottomans used the flood water to their advantage diverting it towards the British by breaching the bunds (dykes). Troops waded through water, got stuck in mud and drowned in flooded shell holes. Despite this, progress was made and the fighting came close enough for Townshend's troops to fire their five inch guns at a Turkish ferry, when the mirage permitted accurate sighting. The fighting was fierce and casualties were high on both sides. At least five VCs were awarded, including the Rev. WRF Addison, chaplain to the 6th Loyal North Lancashires.

But it was not enough. By the 22nd April, Gorringe realised his troops could not break through. In a last desperate attempt to supply Kut, the steamship Julnar was reinforced with steel plate and loaded with three weeks supply of food and medicine. She set off at night on 24th April, crewed by volunteers. Weighted down by her armour and stores, she could only make five knots against the current, giving the Ottomans time to prepare for her arrival with a cable stretched across the Tigris, five miles from Kut. The captain was executed, the crew taken prisoner and the stores were appropriated by the Ottomans.

There was no option now but to surrender Kut and negotiations opened on 26th April. Townshend wanted his commander General Percy Lake to lead the discussions but Lake did not want to be involved in what would certainly end in British humiliation and instructed Townshend to carry on with the assistance of Captain Aubrey Herbert and Captain TE Lawrence of the Cairo Military Intelligence Office and Colonel Edward Beach of the Tigris Corps Intelligence Branch. This was Lawrence's opportunity to try Kitchener's second ploy, to bribe an Ottoman commander. There appears, however, to have been no communication between these three and Townshend. Townshend initially tried to buy his troops freedom with an offer of 40 cannon and £1million if they were allowed to withdraw on a pledge not to take up arms again against the Ottomans. When this was rejected, he destroyed the cannon and, on 29th April, 1916, offered his unconditional surrender. Although they did not know it, by the time the three negotiators met Khalil Bey, later that day, the Kut garrison were already prisoners of war. He listened politely but dismissively to their plea for clemency towards the Arab citizens of Kut and their attempts to buy the freedom of the garrison. Khalil's one request was for ships to transport the British prisoners to Baghdad to avoid them having to walk. Beach knew they did not have enough shipping for the Tigris Corps as it was, and could only refer the request to General Lake. As it was clear to Khalil that this deputation was relatively junior and had nothing new to offer, they were dismissed. Military success was more important than money to Khalil. Senior Ottoman officers were not as easy to bribe as Kitchener thought.

Over the previous four months, the relief force had suffered over 23,000 casualties. On 29th April, 1916, the 13,309 men they had sought to rescue became prisoners of war, the largest British surrender ever.

Eugene Rogan, The Fall of the Ottomans