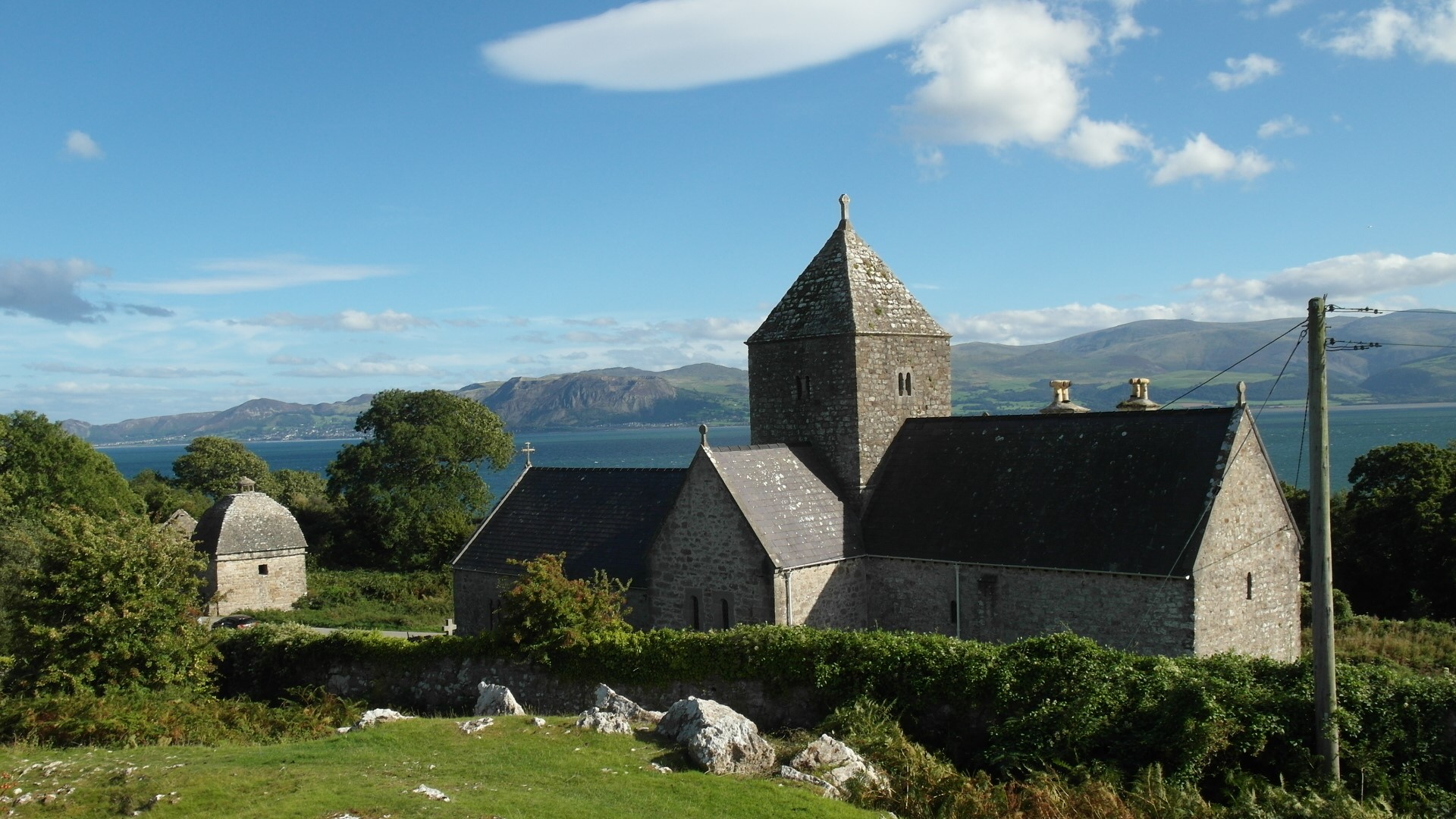 Postcode LL58 8RW. By bus: bus stop and shelter at the bottom of the hill to Penmon Village; about 1 mile walk by road to the church (not up hill), keeping the sea on your right,.

This was compiled from the Cymdeithas Hanes Teuluoedd - Gwynedd Family History Society book of Memorial Inscriptions; the number following each entry is their reference.

Inside the church: enter the church by stone steps adjacent to the Monastery refectory building, through the gate, follow the gravel path; house straight ahead, church porch on right.

Inside the Church, brass plaque in nave

Inside the Church, brass plaque on the side of the organ

2 - This organ was renovated in May 1963, the cost being borne by Mrs. Donald Cameron, a member of this Church, in memory of her brother, Philip Henry Baker R.F.C.

Philip Henry Baker, commissioned into the Royal Flying Corps in October 1916 is later recorded as having an accident; possibly fire and probably in an aircraft before take-off. He survived the war.

Inside the Church, small framed commemoration to Penmon Scouts

The most likely match for ‘Scout J. Roberts’ is John Roberts who died in Italy – see below

Basil Gerald Tennent; born Bristol, brought up in Newcastle; career serviceman, had joined the RAF at age 15; served in Singapore where he and his family lived; all wives and children were evacuated February 1942 as the Japanese invaded, the men became a Prisoners of War, were marched to a non-existent camp, all died.

Up the steps and through the gap in the wall, double back to 1st row, count 5 headstones on your left from steps (slate headstone with kerb )

John Henry Parry of Coedwig Terrace, Penmon; worked as a Quarryman in the Penmon Limestone Quarries; both he and Henry Pritchard (see below) were given copies of the Bible from the congregation of Capel Ty Rhys; both men had a poem by Gwilym Seiriol published in the local paper, mourning their death; John Henry had clearly been a great hymn singer; volunteered in 1914, health broken by military training, discharged on grounds of poor health (TB), given a Silver War Badge May 1916; died at home 11th June 1918 age 23; buried St Seiriol Churchyard, Penmon with his sister, Molly. (CWGC burial; private headstone).

Glyn (Glynne) Roberts was brought up in Tyn Lon Cottages, Llanfaes; worked as a Labourer in the Limestone Quarries (his father was a Winch Driver) served in the Royal Field Artillery; killed in action, in Egypt; married to Doreen; brother of John Roberts.

9th row, many unmarked graves, middle of 3 upright headstones near the wall (marble headstone and kerb)

Rice Edwin Rowlands was brought up in a farming family at Plas Newydd Farm, Llangoed; he was ‘in business’ and had worked in Liverpool, London and Paris before the war; served in the Royal Army Service Corps in France, Algeria and Tunisia; demobbed on 17th June 1920; returned to work in Cairo (Egypt) until his health failed; buried St Seiriol Churchyard, Penmon (private burial).

Not an official War Casualty, no CWGC entry or War Memorial entry

Next row, 2 headstones in one plot, with a low railing (slate headstone, fuchsia in roundel)