In this issue, we have an article on a VC, Sidney Walker, from Keith, and one on the Zeebrugge Raid by Terry Jackson from Stockport branch. As ever, we owe many thanks to Jim Morris for allowing us to use his WWI day by day material on the Facebook page.

May 5 : Rob Thompson -  Wombles of the Western Front: Salvage operations

The troubled birth of the British Fighter

Dr Simon House came to talk to us about research he had done on the German Ardennes component of the Schlieffen plan, in August 1914. The French counter attacks could very easily have succeeded 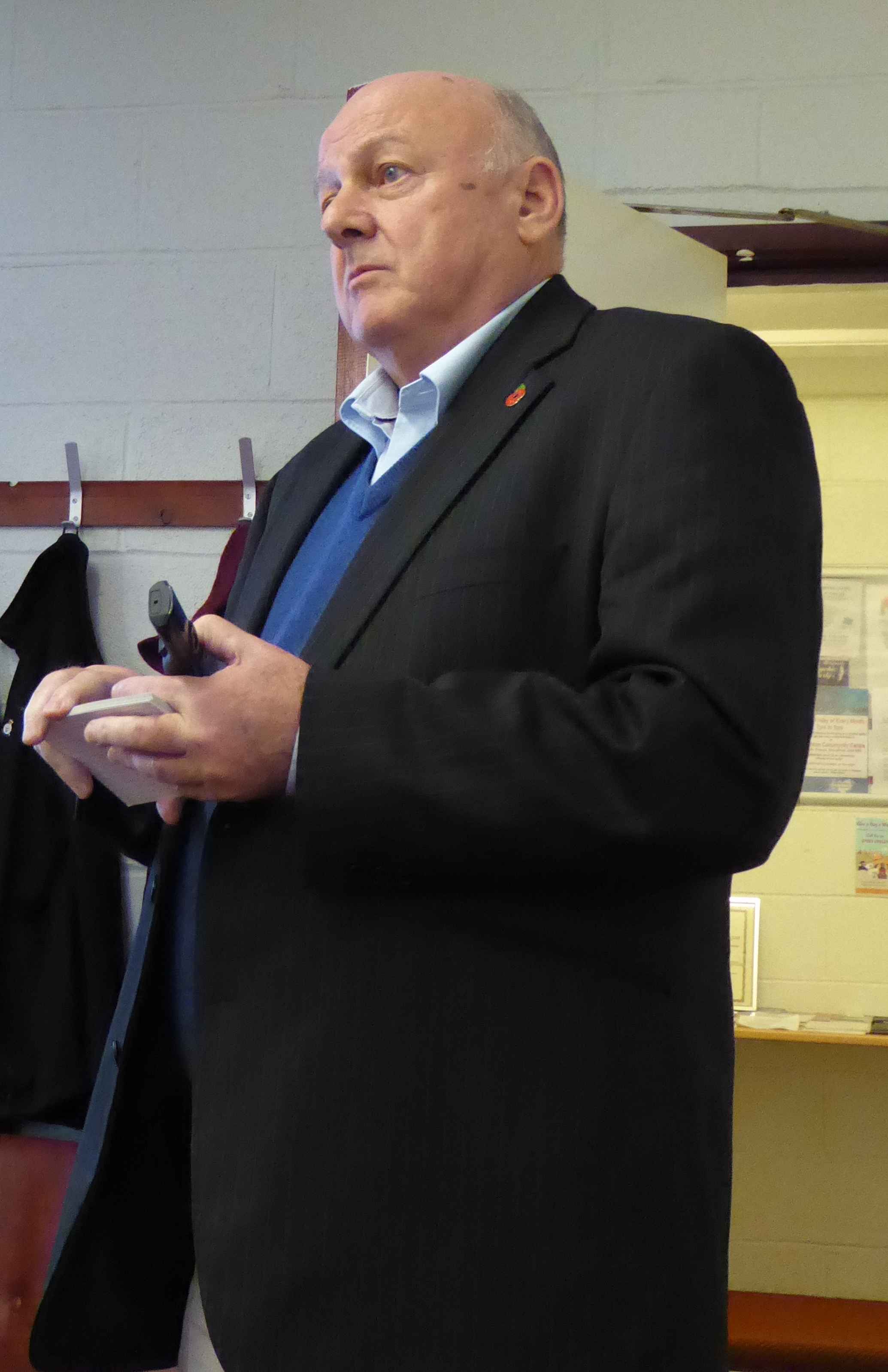 and altered the whole course of WWI. This was the war of movement which disappeared on the Western Front from September 1914, not to re-appear until the Spring of 1918. It was, of course, supposed to be a short war, not least because the cost of a long war would bankrupt the participants, which indeed it did.

Simon told us about the German reserve divisions which, contrary to popular myth, had no machine guns, although of course the full-timers did have them. The worst day for the Entente in WWI was 22nd August 1914 when the French lost 27,000 dead, not total casualties, in one day in this sector.

Simon, commendably, understands both French and German and was thus able to deal with material in those languages in his research. This is in marked contrast to many “professional” historians who cannot do so, which I personally think is ridiculous.

An auction on the 28th February 2018 saw the sale of another VC from the First World War. The group comprised the Victoria Cross, 1914-1915 Star, British War Medal, Victory Medal, George VI Coronation Medal and the Elizabeth II Coronation Medal (below). 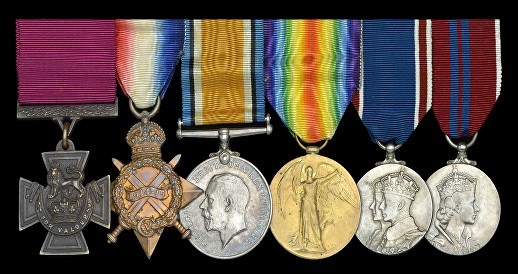 Sidney James Day was born on the 3rd July 1891 at 4 St Anne's Lane, off King St, Conisford, Norwich, Norfolk to William and Elizabeth Day. His father William was the head cellar-man at Morgan’s Brewery in Norwich. Sidney was the youngest of eight children. He was educated at St Mark's School, Lekenham. At the end of his schooling, he was employed as an apprentice butcher with Mr Miller at St Catherine's Plain, Suffolk.

On the 26th September, the battalion was attacking the German trenches when Day saw his commanding officer, Lieutenant Thomas Stevens, being badly wounded. He lifted Lt Stevens onto his shoulders to try and get him back to their own lines, but they were spotted by a German sniper who shot Lt Stevens dead and wounded Day.

Almost a year to the day later, on the 18th September 1916, at the Battle of the Somme, Sidney J Day was shot four times in the left chest, side, thigh and buttock. He was evacuated down the line to the base hospital and from there back home to England. He was treated for his wounds at Norfolk War Hospital for six months.

On the 19th March 1917, he was transferred to the 3rd btn Suffolk Regiment. He stayed with them until the 9th June 1917 when he returned to France and joined the 11th btn Suffolk Regiment which was part of the 101 brigade in the 34th Division. L/Cpl Day was promoted Corporal on the 17th August 1917 and given command of a section.

He was awarded his VC for an action in trenches East of Hargicourt in France on the 26th August 1917. He was detailed to clear a maze of German trenches. His citation reads:-

Cpl Day was in command of a bombing section detailed to clear a maze of trenches still held by the enemy; this he did, killing two machine gunners and taking four prisoners. On reaching a point where the trench had been levelled, he went alone and bombed his way through to the left, in order to gain touch with the neighbouring troops.

Immediately on his return to his section a stick bomb fell into a trench occupied by two officers (one badly wounded) and three other ranks.   Cpl Day seized the bomb and threw it over the trench where it immediately exploded. This prompt action undoubtedly saved the lives of those in the trench.

He afterwards completed the clearing of the trench and establishing himself in an advanced position where he remained for sixty six hours at his post, which came under intense hostile shell and rifle grenade fire.

Throughout the whole operations his conduct was an inspiration to all.” 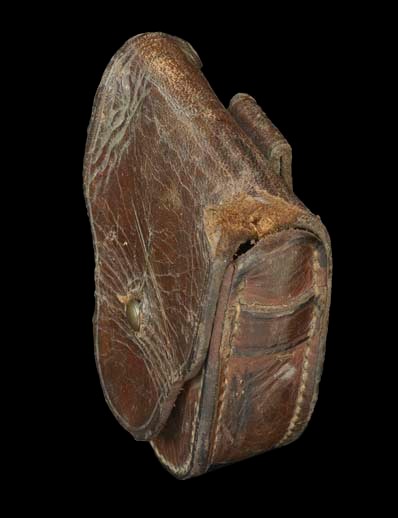 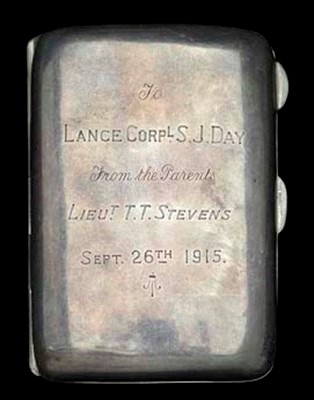 In December 1917, Day was given leave which was extended by the War Office so that he could attend his investiture at Buckingham Palace where he received his VC from King George V on the 9th January 1918. On the following day, he had to return to hospital for more treatment.

He returned to France and re-joined the 11th btn Suffolk regiment on the 7th April 1918. The regiment were in trenches at Erquingham which is North West of Lille.

In action on the 10th April 1918, he was wounded again and captured by the Germans. The Germans treated him in hospital. He was then transferred to a POW camp at Langensala in central Germany, West of Leipzig. He was repatriated back home on the 23rd December 1918. Sidney James Day was released from the army on the 19th April 1919. He was assessed as disabled and given a pension.

On the 11th November 1920, Sidney James Day VC was part of the honour guard at the burial in Westminster Abbey of the Unknown Warrior.

Sometime in the early 1930s, he moved from Norwich to Portsmouth in Hampshire and opened a tearoom at Portsea called “Sidney Day VC Tearoom”. In 1941, the tearoom was destroyed in the Portsmouth blitz. Day then found work as a messenger in the dockyard. He married Doris Edna Grey on the 21st June 1939, they had one son Michael who was born on the 24th February 1943. Sidney Day was diagnosed with tuberculosis, and retired on the 9th March 1956. He died in hospital on the 17th July 1959. He is buried in Milton cemetery Portsmouth (plot R row 11 grave 6).

In the auction lot, as well as the medals, is an inscribed cigarette case given to Day by the parents of Lt Stevens the officer he tried to save. There is also a compass case with a hole in it that deflected a bullet that could have killed him. Also paperwork from the compensation claim in respect of the tearoom.

The lot sold for £192,000. They were brought by Lord Ashcroft and will go on display at the Imperial War Museum in London.

“The Armourer” magazine, May edition

HMS Vindictive served with the Mediterranean Squadron from 1900, Captain Herbert Augustus Warren in command. She visited Larnaka in June 1902. 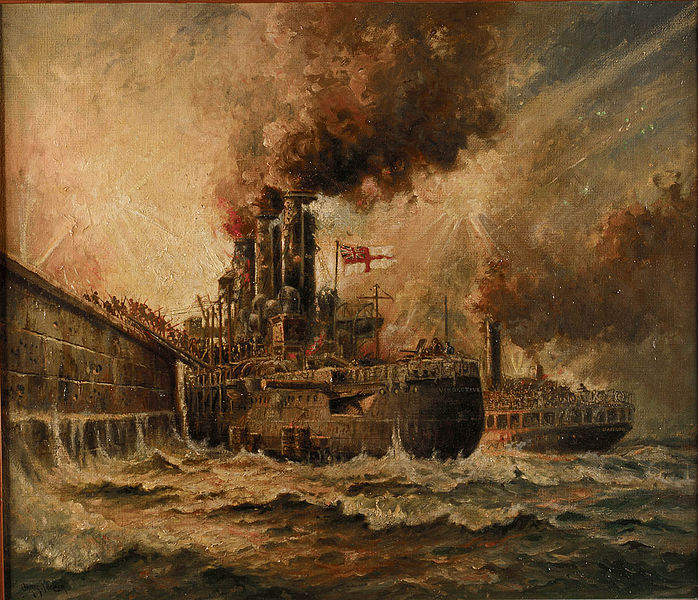 She was refitted in 1909–10 for service in the 3rd Division of the Home Fleet. In March 1912, she became a tender to the training establishment HMS Vernon. Obsolescent by the outbreak of First World War in August 1914, she was assigned to the 9th Cruiser Squadron and captured the German merchantmen Schlesien and Slawentzitz on 7 August and 8 September respectively.

Early in 1918, she was fitted out for the Zeebrugge Raid. Most of her guns were replaced by howitzers, flame-throwers and mortars. On 23 April 1918, she was in fierce action at Zeebrugge when she went alongside the mole, and her upper works were badly damaged by gunfire. Her Captain, Alfred Carpenter, was awarded a Victoria Cross for his actions during the raid. This event was famously painted by Charles de Lacy, and the painting hangs in the Britannia Royal Naval College.

In addition to her usual complement, she embarked Royal Marine gunners to man the supplementary armament, and a larger raiding party. This comprised two of the three infantry companies of the 4th Battalion, Royal Marine Light Infantry, (their third company being embarked on the Iris), along with two "companies" of seamen raiders commanded by Lieutenant Commander Bryan Fullerton Adams and Lieutenant Arthur Chamberlain ("A" & "B" seamen Companies) respectively. 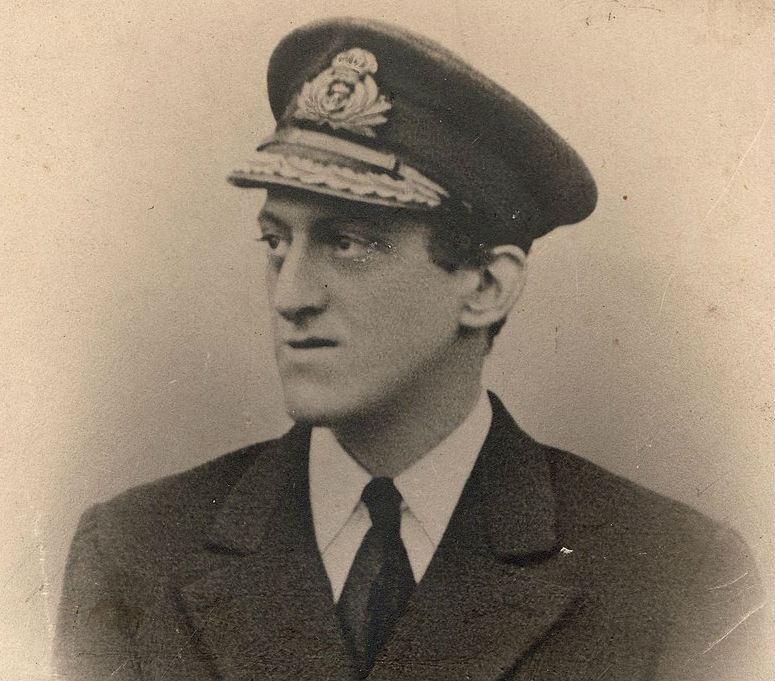 She was sunk as a blockship at Ostend during the Second Ostend Raid on 10 May 1918. HM Motor Launch 254 picked up 38 survivors of Vindictive's 55 crewmen. The ship’s Commander Alfred Godsal (photo right) perished on board. The wreck was raised on 16 August 1920 and subsequently broken up. The bow section has been preserved in Ostend harbour serving as a memorial. One of Vindictive's 7.5-inch howitzers was acquired and preserved by the Imperial War Museum.

The Zeebrugge and Ostend Raids, with their associated crop of VCs, had given the ship late celebrity and her name was perpetuated by renaming the aircraft carrier HMS Cavendish, which was under construction, as Vindictive.