The Church of St Peter, Llanbedgroch 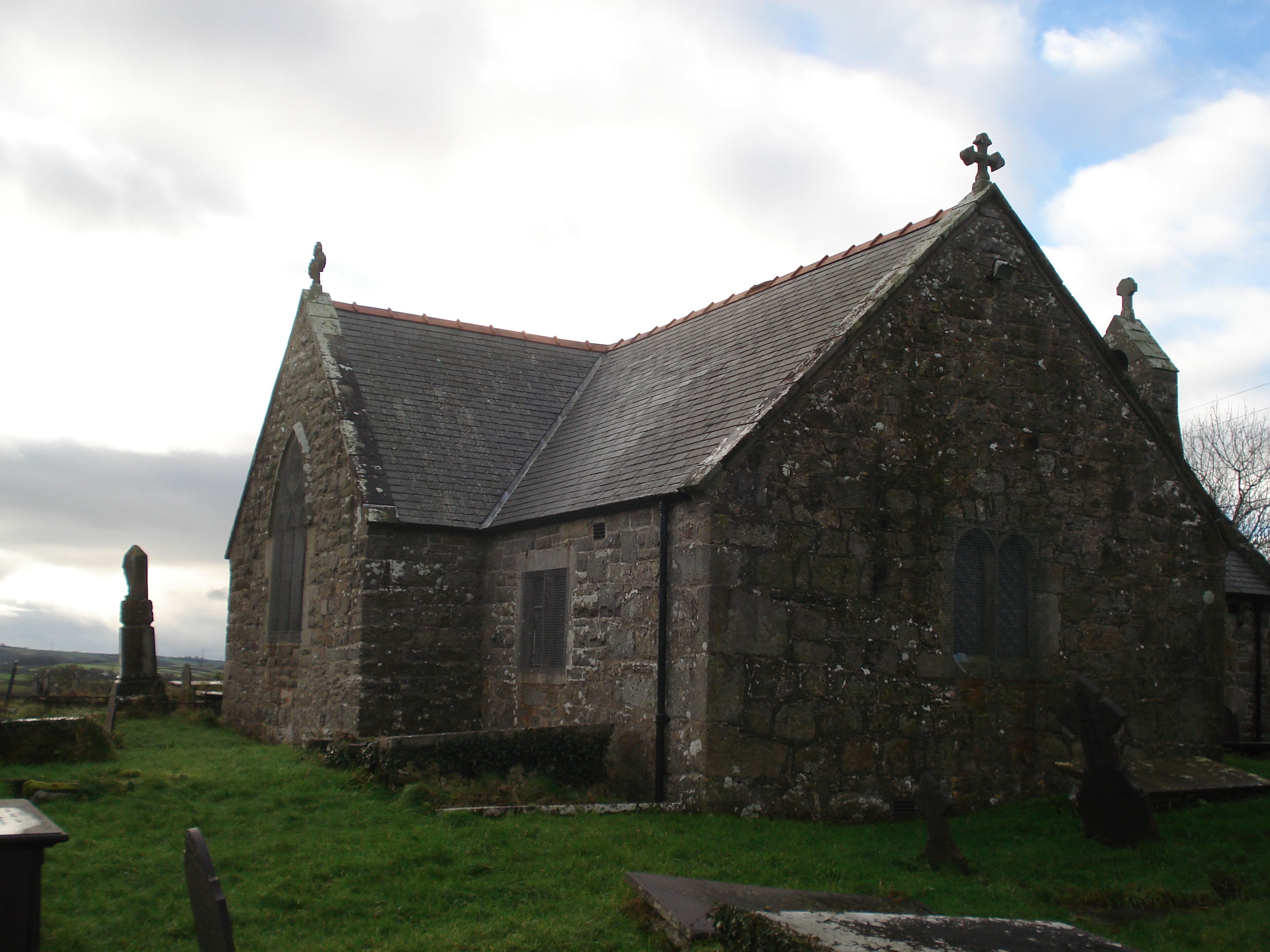 From ‘The History of the Island of Mona’ by Angharad Llwyd, 1832: ‘The church, dedicated to St Peter (whose day is celebrated on the 19th of June) is a small beautiful cruciform structure, with a handsome east window situated on a rocky eminence, in a distant and exposed part of the parish. The parish abounds with lime-stone rock, which is considered of the best quality, of which quarries are worked upon a large scale, affording employment to more than 200 men.   Many thousand tons are exported annually to different parts of the kingdom, from Red Wharf Bay, which is near. The sand in this bay, is said to be the best manure of any hitherto found in the Island; and the quarried of millstones in this neighbourhood, mentioned in the extent (26th of Edward III) as “royal property”, supply nearly all Mona, and Caernarvonshire, with these necessary articles, for their durability, as accounted preferable to any dug from the mines of Penmon.”

From the internet: archaeological research in the area has found evidence of habitation here from 3300 BC, through the Roman occupation (240 – 450 AD) and beyond. Burials from the time when the Vikings on the Isle of Man controlled Gwynedd and possibly parts of Anglesey (later part of 10th century) were found recently (National Museum of Wales).

This was compiled from the Record of Memorial Inscriptions of Cymdeithas Hanes Teuluoedd - Gwynedd Family History Society. The alphanumeric number refers to their record.

Enter the churchyard through the gate from the car park; turn left and follow the path – church on your right

1 (1) - Look for the box tomb on the right hand side of path to ‘Thomas Williams, annwyl briod Margaret Williams’; look left, 3 slate headstones face the wall; middle headstone (your back to the churchyard wall)

Possibly the only boy in a family of at least 6. In the 1911 Cenusus, age 14, he was a Farm Servant at Ty Mawr Llanbedrgoch, so will have been used to working with horses.

Signaller Emlyn Jones was a career Royal Navy man, he died when his ship Anking, a ‘depot and supply ship’ was torpedoed by the Japanese Navy off Java. HMS Anking was part of a convoy. It was an engagement in which the captain and crew of the Royal Navy Australian Ship Yarra acted with unbelievable bravery, attempting to save the rest of the convoy. The Japanese Navy methodically destroyed each ship in the convoy, one by one, leaving the Yarra until last.

3 (9) - Return to the path, look right, 3rd headstone from the box tomb by the path, polished granite low headstone with kerb

He was part of the Allied invasion of Italy, pushing the German force out, from the bottom up.

4 (6) – Again, look to the right of the path: 2 headstones along, 2nd row into plot, 2 headstones of similar height but different design, pink granite – right hand one

A career Merchant Seaman, Henry William Hughes had lived at Brynhyfryd, Llanfair-Mathafarn-Eithaf; on this trip he was First Mate of the Cymrian, a ‘defensively armed’ cargo boat, carrying coal from Newport (South Wales) to Dublin when torpedoed by U Boat UC-75 off Wexford. Another crew member lost was John Rowlands, the nephew of Mary Hughes. John, from Trevor, had gone back into the Cymrian in order to save his uncle.

5 (3) – Stand so you can see between the 2 pink granite headstones described above, 5th row into plot, slate CWGC headstone with silver lettering

Hugh Parry, son of John Parry Ty Gwyn Llanddyfnan and husband of Jenny Parry Marian Farm Llangoed; horseman on the farm; taken ashore to hospital in Birkenhead with flu (at least 6 of the crew died from flu); commemorated War Memorials in Llangoed & Llanbedrgoch

Gwyneth’s birth was registered in Bangor early in 1918; the ATS was the womens’ branch of the Army, they were more than the ‘clerks, cooks and waitresses’ of WWI; as a ‘Junior Commander’ she was a commissioned Officer, equivalent to an Army Captain.

7 (11) – Follow the path, churchyard wall on your left – where the path turns - count 8 headstones by the path

John Jones was a career Royal Navy Signaller; he was serving on HMS Prince of Wales; she had, famously been at the Battle of the Denmark Strait when she had damaged the German battleship Bismarck at the time when HMS Hood was lost (the Bismarck was later pursued and scuttled); the Prince of Wales took Churchill to Newfoundland for a conference with Roosevelt; was lost when in convoy from Java to Australia, torpedoed and sunk by Japanese bombers, off the coast of Malaya.