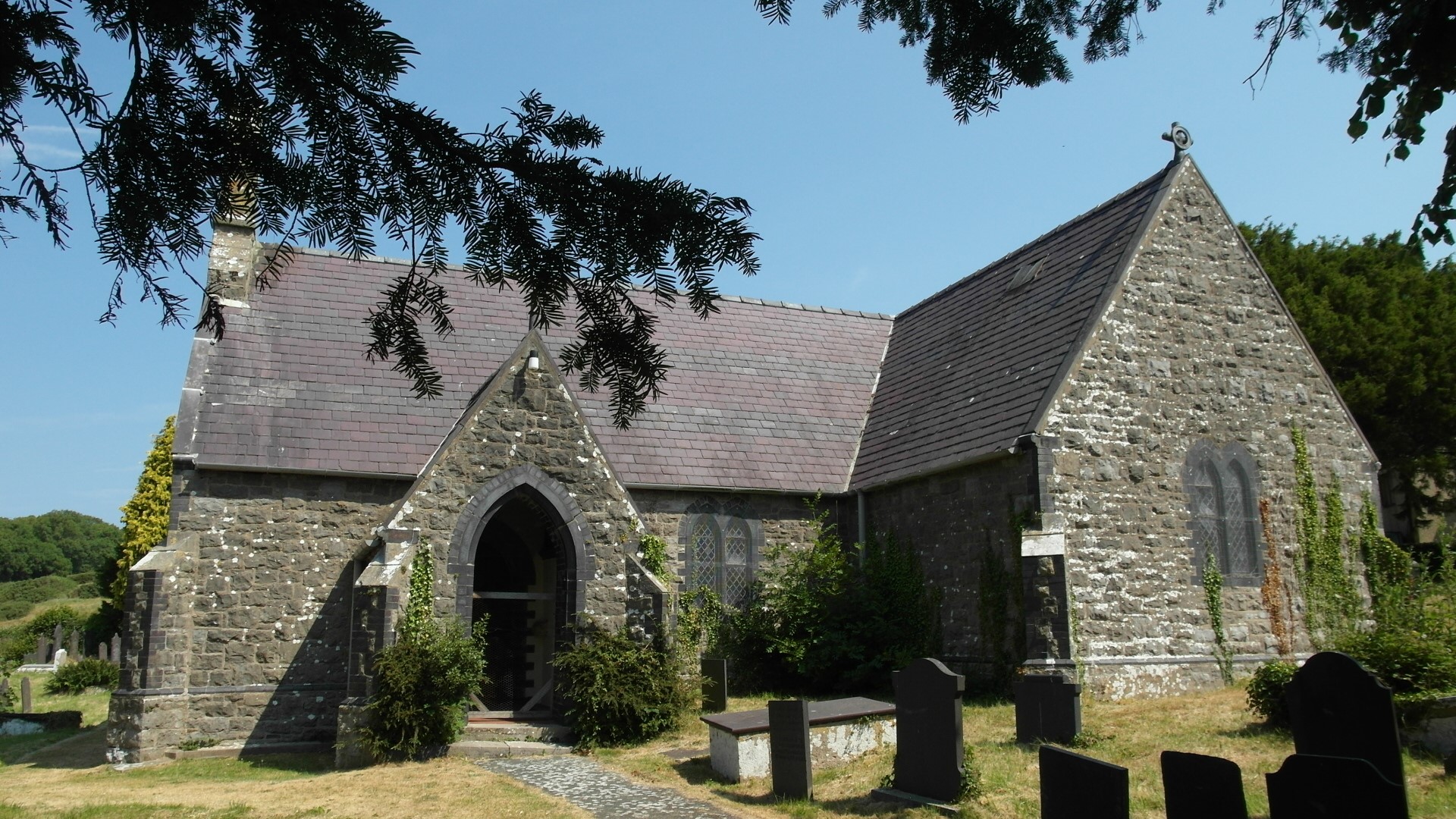 By car: roadside parking by the church or free car park, off road, between the nearby chapel, (Capel Tŷ Rhys) up hill, and the graveyard behind the chapel. Most of the churchyard is turf.

This was compiled from the Cymdeithas Hanes Teuluoedd - Gwynedd Family History Society book of Memorial Inscriptions; the number following each entry is their reference.

Angharad Llwyd in her 1833 book ‘A History of the Island of Mona’ explains the name: ‘Llan Cowrda – the church is dedicated to Cowrda, one of the ancient Colidei, who was buried here.’

From the lych gate, follow path towards the church porch; 12th upright headstone on right of the path (pink granite headstone and kerb)

Pass the church porch, veer left (grass path); walk along path, keeping your back to the church; 1st row from where the ground dips, 3rd grave on your right (slate headstone with kerb, lettering losing its paint; headstone starting to lean)

Robert John Thomas was brought up in Angorfa, Llangoed; served with the Royal Army Service Corps; killed in action, during the follow up to the D Day landings of June 1944, there was fierce fighting to push the German invaders back, step by step.

One more row away from the church, and along to the distinctive white CWGC headstone

Owen Roberts brought up in Llangoed; died on Tuesday 21st May 1940.

From the CWGC headstone, one row closer to church (discoloured marble headstone with kerb and ‘immortelles’ flowers under a glass dome, protected by a cage)

William ‘Willie’ Jones of Tan y Lôn, Llangoed (now Tan Lon); eldest son, he joined up underage, his family were told that he was ‘Missing’ (as on Llangoed War Memorial); his mother made every effort to find him, until her death; she never believed that a person could be lost.

Hugh John Jones, still known as ‘Hughie John’ lived at 4 Beaumaris Road Llangoed; worked as a Quarryman in the Limestone Quarries; was a prisoner of war; died whilst in captivity; buried in Malbork Commonwealth War Cemetery, Poland

Turn to face church, walk towards the house visible over the wall; church on your right, mature tree on your left; tall slate headstone immediately right of tree, facing the wall

David John Hughes of Tyn Gate Llangoed; was working as a Joiner in Liverpool when he signed up, hence serving with a Liverpool Regiment; killed in action

Keep church on your right, wall on your left and walk across graveyard towards the lych gate; a modest (home made) concrete cross on your left with inset slate plaque, facing the wall

Frederik Theophiel Hendrik Mertens of Plas Llangoed; the son of a refugee family from Malines in Belgium, the family fled here when the Germans invaded in August 1914; the local community had made provision for these families, with accommodation in Plas Llangoed, clothing and provisions ready; his father, Yan (Jan) a skilled engineer, probably went on to work for the War Office; Frederik died January 5th 1915 from diabetes; buried Churchyard of St Cawrdaf, Llangoed. Not a war casualty

Note: the famous ‘Cadair Ddu’ (the Black Chair) was won by Ellis Humphrey Evans, under his bardic name of Hedd Wyn, at the Eisteddfod Genedlaethol (National Eisteddfod) of 1917 held in Birkenhead. It had been carved by Eugene Vanfleteren, another refugee from Malines and paid for by David Evans, an Anglesey man who had a very successful building business in Birkenhead. David Evans built himself a country house, Cynlais, in Penmon and was buried in the graveyard of Capel Ty Rhys, Llangoed.