It’s been quite some time since I last wrote about our continuing exploits across the burial grounds and memorials of the Great War in honour of our servicemen.

The first of three tours this year – April - brought us back to a campsite that we first visited in June 2012; in the town of Aubencheul, between Cambrai and Douai. It’s your typical French site, mostly laid out to static residential caravans, although when we arrived at the beginning of April, it was only busy at the weekends. Not surprising as prior to Easter, most mornings we awoke to an early morning frost.

From here, over a twenty six day period we visited 126 burial grounds, all within the confines of Department Nord. The vast majority of the sites were started during 1918 and coincided with the defeat of the Germans on the Hindenburg Line from the 27th September, 1918, although many of the burials dated from the Battle of Cambrai of November and December, 1917.

By the last few days of our Pilgrimage, we were travelling in excess of an hour to arrive at our first burial ground of the day and in the end this excessive travel time and frustrations of locating private memorials brought a premature end to our first tour, leaving around ten sites still to complete.

The Pilgrimage continues to be a real challenge on mind, body and soul for both of us. I no longer have the strength to haul Nancy and wheelchair up cemetery steps and around the often steep gradients of communal cemeteries. Nancy finds it difficult to cope with any form of temperature variation and by the end of most days she was completely drained of any energy that she had, meaning getting her in and out of the vehicle, then the caravan, became so difficult.

Nevertheless, after four weeks back home we had forgotten about the difficult times – as one does – and by the first days of June, we were back in France!

Again, we planned to stop at just one site and yet again paid the price with extended journey times. Villers-Sire-Nicole is a small village a few kilometres north of Meaubeuge on the road to Mons. From here we planned to visit sites in the department of Nord and the Belgian province of Hainaut. The vast majority of burial grounds were communal cemeteries, with British plots. The CWGC burial grounds that we did visit, contained mostly servicemen who fell during the last few days of the war, particularly during the Battle of the Sambre (4th November, 1918).

After our tough first Pilgrimage of the year in April and improved weather, we promised to ease up on our schedule and convinced ourselves that the dead weren’t going anywhere soon, and if we ran out of time, then we would just have to come back another day! We even gave ourselves a couple of days off and managed to watch the England Lionesses (and V.A.R) defeat Cameroon in an ill-tempered World Cup game at Valenciennes. We also visited the CWGC’s new visitor’s centre at Arras.

We deliberately keep the summer months clear, knowing full well the hot weather impacts on Nancy. Depressingly, our second Pilgrimage of the year coincided with a heat wave, forcing us to admit defeat for several days. To rub salt in our wounds, I had my phone stolen from outside a communal cemetery. I had left the window ajar, clearly by too much for some “snake hand”!

By the time we left for home, we had completed a further 114 burial grounds, but still needed to return to complete both Nord and Hainaut later in the year, having initially hoped two visits would have been enough.

Our third and final visit of the year in September required more planning in terms of campsites. Proposed visits would not be possible from just one site. In preparation, we booked the municipal site in Tournai, Belgium, which hopefully would see us complete all remaining burial grounds in the department of Nord. Our second site took us to the Belgian province of Hainaut, where we planned to not only to complete Hainaut, but the remaining isolated sites across Belgium. This required a two day journey, broken by an overnight stop in the town of Spa.

Our site in Hainaut was close to the town of Escudinnes, north of Charleroi. Not the best site we have stayed at, made worse by the fact that it rained almost continuously during our stay.

After three weeks I was ready for home and was quite prepared to head back north. I have a fear of “going through the motions,” and felt that I was close. Anyhow, the municipal site at Soissons was still open as we entered October, so off we set, with no improvement to the weather.

From Soissons we visited 16 burial grounds in the department of Aisne. Although we said “Thank You” to servicemen from the earliest days of the Great War, the vast majority of those that we “Thanked”, fell during the (Third) Battle of the Aisne (27th May - 6th June, 1918) and the 2nd Battle of the Marne, 15th July – 6th August, 1918), when several British divisions served under French command.

Over the last few weeks whilst at home Nancy and I have been working on the accuracy of our database. At some stage, it had become corrupted and subsequently we discovered that we STILL had sites in Belgium to visit!

In total we have 209 burial grounds remaining, which includes 21 in Belgium (mostly churchyards in West Flanders). The French burial grounds are spread throughout France, and are not just in the departments which covered the Western Front. With the exception of 26 burial grounds in the department of Marne - mostly British CWGC cemeteries from the May – June 1918 fighting – there are a further 42 French departments that contain burial grounds, including Bouches-du-Rhone and Herault in the south, Gironde in the west, to Bas-Rhin in the east. In the west, our Pilgrimage will take us to Finistere, Brittany and include burials on two islands off the Atlantic coast!

We plan to complete our Pilgrimage in 2020 and therefore we are focussing on just two further visits; one with caravan (April) and one with vehicle (September). The caravan will be used to visit the sites to the east, where the department of the Marne (26) will lead us eastwards towards Ardennes (16), Meuse (6), Moselle (11), Meurthe-et-Moselle (13), and Bas-Rhin (12). Once at Strasbourg, we hope to be able to store the caravan for about ten days so that we can head south to complete several other departments. Our April 2020 journey will commence with seven days in Ypres, to complete our Belgian Pilgrimage. It is hoped that five weeks should be enough time to complete all 136 planned visits. Then and only then, can we plan what should be our final Pilgrimage.

Last week there was an attempted theft of our caravan. The thieves removed the hitch lock, cut the farmers fence and towed it across open fields, before getting bogged down in mud. Thankfully we got it back with no damaged, unfortunately they didn’t steal the blow up awning...pity. What a waste of money that turned out to be!

Below are several images from our burgeoning collection; now totalling 30,000. 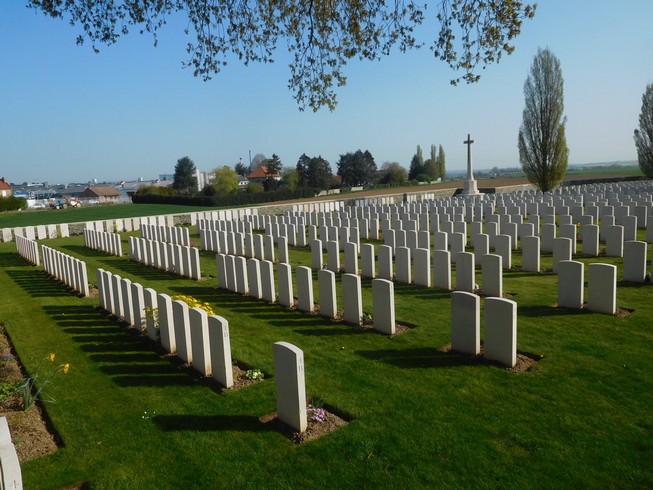 There are around 250 burial grounds throughout the department of Nord that were started in 1918, the vast majority see just a handful of visitors each year; certainly once one moves clear of Cambrai. Throughout the entire weeks of 2019 that Nancy and I visited the burial grounds, we only saw other visitors in Flesquieres Hill Cemetery. This is Awoingt British Cemetery with 653 burials, it was used by several Casualty Clearing Stations who established themselves close by from October 1918. It was, like many of the larger burial grounds in Nord, extended by the concentration of graves from smaller burial grounds after the Armistice.

It was late afternoon when we started our Pilgrimage and the sun was already creating shadows which made reading difficult. We returned the following morning to take photographs, marking several graves with stones. It was always desirable that British graves faced the enemy – east – and therefore Spring afternoon sun can cause problems. 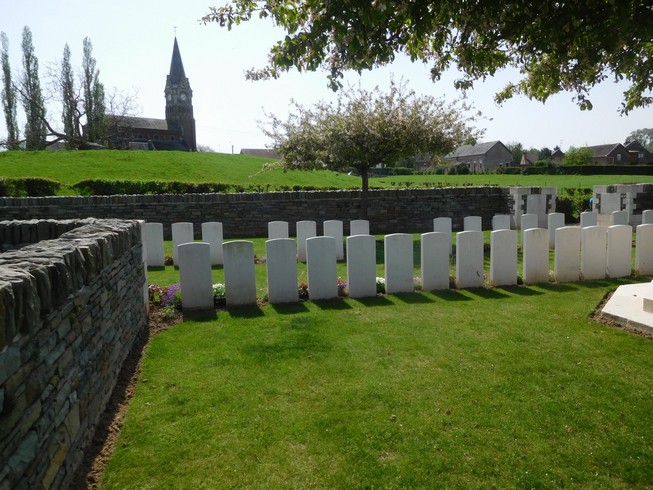 The beautifully located Beaurain British Cemetery with 57 burials (inc. one unknown). Many of the smaller burial grounds from October 1918 feature the graves of the same battalion, Brigade or Division. Here, the burials are mainly 37th Division: 13/King’s Royal Rifle Corps and 13/Royal Fusiliers. With no cemetery registers available in the small CWGC cemeteries – a minor frustration - we usually wait till we get home to check the on-line history and burials. For only the second time in seven years of visits, I photographed a group of three continuous servicemen with Military Medals; all 13/Royal Fusiliers who died on the same date, 24th October, 1918. 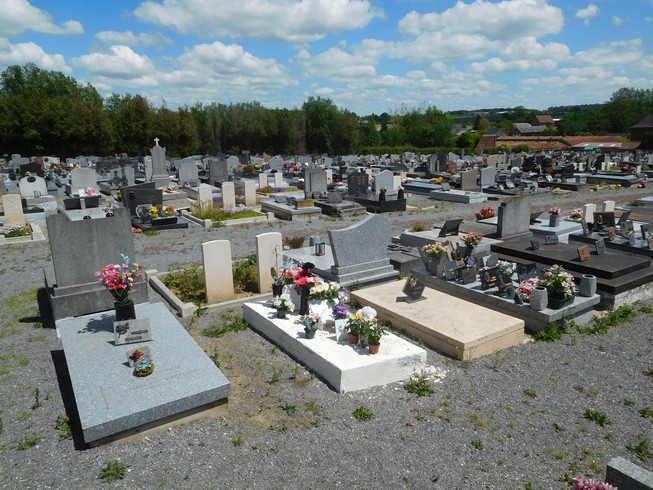 The further reaches of the Nord include many British and Commonwealth burials within French Communal cemeteries. Here at Sains-du-Nord, all 26 burials date from March – May 1918 and died as prisoners of war. In larger cemeteries the burials are normally regrouped; much easier to locate than here! 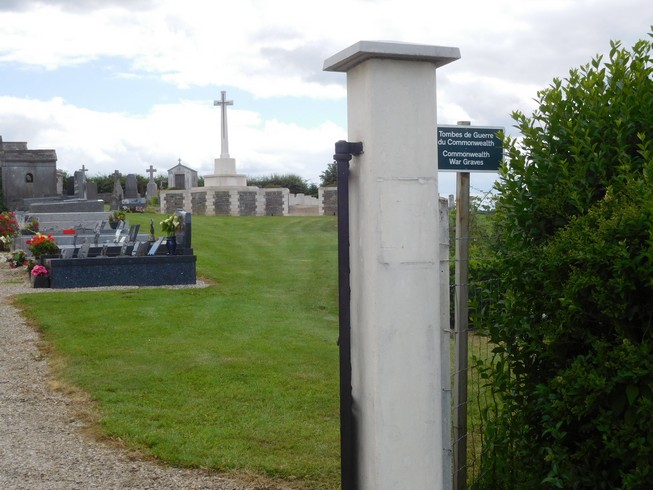 Le Rejet de Beaulieu Communal Cemetery with 52 known burials. Usually where there are more than 40 burials a Cross of Sacrifice is in situ. The British plot here has been further enhanced with a raised wall. Many of the graves here are servicemen who fell during the last great offensive, the Battle of the Sambre, from 4th November, 1918. It was by comparison larger than the Battle of the Somme, but other than the death of war poet Wilfred Owen is little known about. 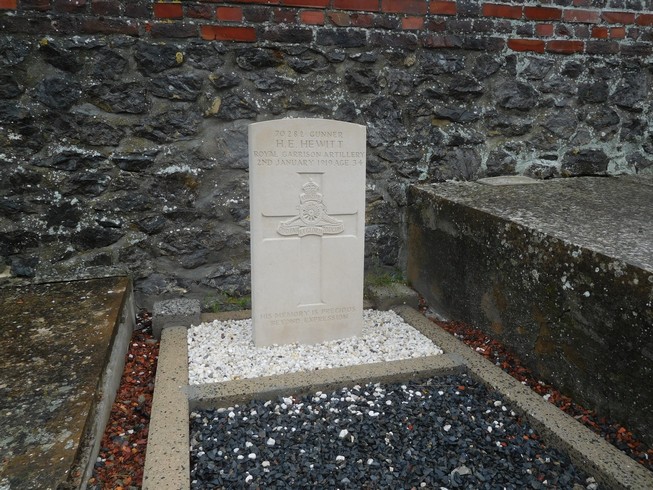 Many of the communal cemeteries in the province of Hainaut, Belgium contain the graves of servicemen who died post Armistice. I think of these men as “The Forgotten”; even in my own eyes. I was determined to honour them with due reverence. The first post Armistice burial we paid our respects to was Gunner Harry Hewitt of the Royal Garrison Artillery, who is the single burial at the very isolated Belgian communal cemetery at Fontaine-Valmont. He died of heart failure on the 2nd January, 1919. His wife chose the inscription: “HIS MEMORY IS PRECIOUS BEYOND EXPRESSION”. It was as though it was written for my attention! 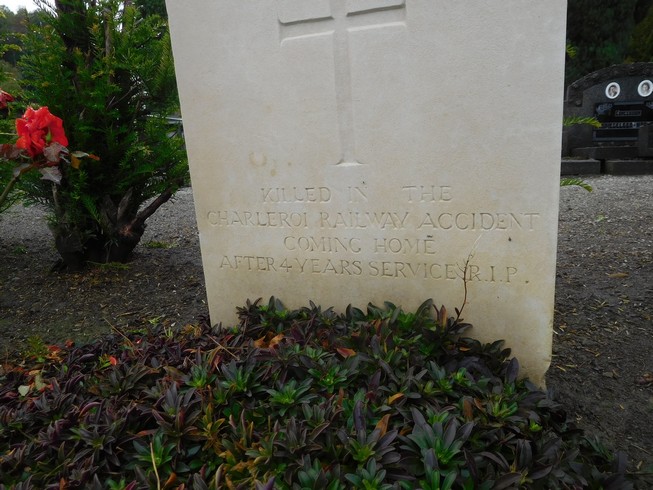 The inscription on the headstone of Sergeant Frederick Marcus Bridges of the Labour Corps, 29th May, 1919, buried in Marcinelle New Communal Cemetery, Hainaut, Belgium.