In this edition, we have an article from Keith about the man behind a very unusual medal. Pam has unearthed a memoire of a heavy gunner and the current list of commemorative work by the CWGC.

In November 2018, an interesting auction took place at Sheffield Auction Gallery. Up for auction was a medal group comprising of:-

They had been awarded to Frederick Parsons, a Chief Petty Officer of the Royal Navy.

In 1909, Petty Officer Frederick Parsons was one of the eight thousand applicants who applied to join the British Antarctic Expedition led by Captain Robert Falcon Scott (b 6th June 1868 to d 29th March 1912).

In 1910, Petty Officer Parsons joined the expedition led by Captain Scott aboard the Terra Nova a 764 ton, 57 meter long barque-type whaler and polar expedition ship, which had been launched in1884. It had a crew of 65. The history of the expedition is well documented, with Scott failing to reach the South Pole ahead of his rival Roland Amundsen, (b 16th July 1872, d 18th June 1928). Scott and his party perished on the return journey to the Terra Nova.

What interested me was - what did Frederick Parsons do in World War I? Luckily his service papers have survived but they are somewhat difficult to read. 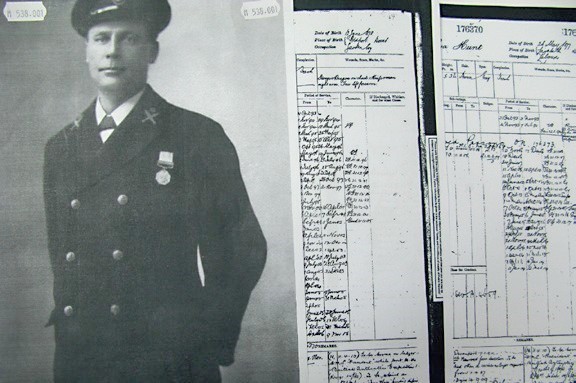 Frederick Parsons was born on the 12th June 1878 at Bridgeport Dorset. He joined the Royal Navy on the 31st October 1893 as a boy sailor, aged 15. He was 5ft 2ins with brown hair and a fresh complexion. His previous occupation is listed as a garden boy. He was sent to the shore establishment HMS Impregnable at Devonport. He was trained on a number of shore establishments - HMS Excellent, HMS Active and HMS Victory I, until he was 18 years old by which time he was 5ft 6 ½ ins tall.

In November 1902, he was promoted to Petty Officer serving on shore ships HMS Vernon and HMS Vivid I, specialising in signals, logistics and early radio communications. He also served on the shore ships HMS Mercury and HMS Forth, a depot ship working on torpedo technology. He was on these ships until 1910. On the 11th April 1910, he was “to be borne on the ledger of HMS President while lent to the British Antarctic Expedition”. On the 14th June 1913, he was promoted to Chief Petty Officer. He was with the expedition until 1913. He was awarded the Polar Medal on the 1st September 1913. In October of 1913, he returned to the Royal Navy and joined HMS Vivid 1.

In August 1914, war was declared. Chief Petty Officer Frederick Parsons was posted to the Monmouth class cruiser HMS Donegal (launched 1903, scrapped 1920) which he served on from October 1914 until May 1915. From May 1915, he was recalled to Devonport where he served on a number of submarine depot ships HMS Dolphin, HMS Maidstone and HMS Adamant. These auxiliary ships supplied the submarines in the English Channel and the war ships of the Dover patrol. Chief Petty Officer Frederick Parsons spent his war based in all the home ports - Plymouth, Portsmouth, Chatham, and Harwich. He was one of the unsung heroes of the war. All his service training in logistics, signals and torpedo technology was put to good use during the war. Fred Parsons left the Royal Navy in 1919 after 26 years’ service to run a shoe repair business in Plymouth.

I could find very little information of what he did after 1919. Only found one reference that Fred Parsons died in 1970 aged 91, the last survivor of the Antarctic Expedition of 1910 to 1913.

1. All 65 men of the crew of the Terra Nova received the Polar Medal

2. The Polar Medal was instituted in 1904. It has a plain 32mm white ribbon. The medal is a 33mm octagonal in silver or bronze.

Memoires of a heavy gunner

The following is an extract of an article taken from the magazine “Twenty Years After”. It is written by an un-named Heavy Gunner. He had resisted writing about memories of his long service at the front and at the end of the complete article, his explains why he chose that moment to do so…

‘At six o’clock on the morning of November 11th my faithful batman brought me a cup of tea. “Well sir” he said with a melancholy air, “they tell me it’s to be all over on the stroke of eleven.” “Good” I replied, turned over and went to sleep again.

But that night we let off every Very light and coloured rocket we had in store. It was only by prompt action that we prevented the sergeant on duty from detonating a lump of dynamite large enough to transform our little French village into a column of dust!

And that for me, as for millions, was the end of the greatest war in history. Lately I have been wondering whether, having resisted many temptations to write a personal memoir of that conflict, I shall still be young enough to put on record a few fragments of another, and doubtless even greater, war if the European cauldron boils over once more’.

I only wish that I know who this gentleman was.

First submission below… I think that he rather liked the Portugese soldiers and felt that they very much deserved better training and leadership. [Ed. We will publish more extracts in later editions].

“The Portugese at Work

New divisions were sent to the Laventie front to be “blooded” and it was here that the Portugese, of notorious repute, came to be tested. I saw their first division march in – a rag-time army, with less march-discipline than a Hyde Park bunch determined to go to Whitehall to demand justice from the government of the day. Many of the rank and file were without shoe leather and hundreds carried rifles from which the pull-throughs had not yet been removed.

The most absurd legends have grown up about these Portugese troops. They caused endless amusement to British soldiers, who were nevertheless very good to them. But they frightened the civilians, who believed they would be left to the mercy of these “sinister” foreigners. Actually, they were not in the least sinister. The men were like large, beefy, good-humoured babies. They could have been transformed into good soldiers. The majority of officers were small, nervous and incredibly inefficient, with very little authority over the men in their charge.

The gunners were the best. But they had no guns, and they didn’t know the first thing about the breech-blocks of the French seventy-fives, with which they were afterwards supplied in the line.

On one occasion, I was sent to a Portugese battery with an order for the commandant. While we were talking the gas alarm sounded and immediately the entire battery dashed madly for their respirator, which of course they weren’t wearing. There was no gas… it was a warm, sunny evening with a gentle breeze blowing in the direction of the enemy. This trifling fact didn’t prevent the gas gong from being struck with great violence twice in the next half-hour. Each time everybody dashed again for his respirator. I asked if it was a practice night, “no, no” the commandant replied gesticulating wildly and sniffing suspiciously. “There is gas about; it is in the air and we must not be caught asleep”.

My last moments with the Portugese battery were impressive. A young lieutenant was on his tour of duty to one of the snug observation points, unblemished by enemy fire, a quarter of a mile away. He wrung our hands solemnly as if to bid us a sad farewell. He wore a thick scarf and from various parts of his body hung trench maps, long leather gauntlets, a prismatic compass, field glasses and two revolvers… but no respirator. His signaler carried a rifle, a large bundle of blankets over his arm and a spirit kettle. His batman, from whose pockets peeped a couple of bottles of wine, was staggering under the weight of an enormous basket-load of provisions, enough for a long siege. And so he passed out of sight. I never saw him again. I hope he got back unhurt. Strange fellows, the Portugese and how they could eat!”

Current commemorative casework of the CWGC