As a way of commemorating the100th anniversary of the Great War, my wife Nancy and I set out in May 2012 to visit every burial ground and memorial in France and Belgium, where First World War servicemen were either buried or commemorated. In addition we vowed to stand at each headstone, read the serviceman’s name aloud, adding “Thank you”. The same act of remembrance would also be followed at the twenty two or so Memorials to the Missing; a collective “Thank you” added after each regiment, column, or panel, depending on the circumstances of the layout.

Over the following eight years, Nancy and I spent large chunks of our time travelling in our caravan and staying at local sites and renting gites in the winter months, in an effort to keep the Pilgrimage active all year round.

After a family bereavement, we returned home to North Wales in July 2018 until the spring of the following year when we started once again. We returned home in October 2019 with just a further 206 burial grounds to complete our Pilgrimage, and perhaps 6,000 burials and commemorations.

Covid was a blow to our plans; a false start in April 2021, led us to postpone any plans until the spring of 2022. We calculated that we needed about twelve weeks to complete our Pilgrimage. This seems excessive, however we are now towards the end of our Pilgrimage and what remains (with the exception of the department of the Marne) are the distant burial grounds where no British offensive took place, but Commonwealth servicemen are buried or commemorated. Although not exhaustive, casualties fall under the following circumstances: POW’s, RAF personnel, Red Cross staff, ship’s crews and military personnel, who were either killed in action, died at sea and then later their remains were washed ashore to be buried in the local cemetery. These 206 burial grounds contain around 6,000 casualties and will take us across four Belgian provinces and over fifty French departments, from the Atlantic sea to Cannes, to Strasbourg, to Bordeaux.

We set off on the 4th May. Thankfully having not booked our crossing before the unfortunate events at P&O, we went with DFDS, booking a week at the popular Jeugdstadion campsite, in walking distance to the Menin Gate. We had 25 sites to complete our Belgian Pilgrimage. The vast majority were communal cemeteries and churchyards in West Flanders, where the local citizens or the enemy had buried British casualties, in occupied territory.

This chapter of the Pilgrimage had got off to the worst possible start when the front passenger door of our minibus refused to open and the ordering of a new door lock (and a three day delay) at the VW dealership in Ypres failed to alleviate the problem!

After a delayed period in Ypres, we departed for the Ardennes, en route visiting the isolated burials of 23 servicemen in the communal cemetery at Houyet, dropping the caravan at a service station and doubling back.

Our chosen caravan site in the Ardennes was Douzy, just east of Sedan and from here we visited a further 15 burial sites, the vast majority containing POW casualties from the Battle of the Aisne (May 27th – June 6th 1918). The burial grounds included several French National Cemeteries (FNC), as described by CWGC, “Necropole” to the French. Many of these sites are no longer signposted or “pinned” on Google Maps! In addition we have been unable to use the very handy CWGC app, which marries cemetery burials with map location.

The mini heat wave we had so far experienced didn’t follow us to the department of the Marne, where on the 18th May we booked in o the municipal campsite at Epernay for seven days and a further 26 burial grounds and the last group of Commonwealth War Grave cemeteries remaining on our Pilgrimage.

Stepping out of the vehicle, locating the disabled access point for Nancy’s wheelchair, then handing her the cemetery register whilst I toddle off to my first plot, has been our life for almost ten years. Recognising that we were visiting the very last few CWGC cemeteries was a bit of a moment!

On Friday 20th May, we visited our last remaining CWGC burial ground with over 1,000 burials, Marfaux British Cemetery (1,129). In keeping with all our visits to British cemeteries in the Marne (on this current trip) Marfaux was yet another post Armistice cemetery with the vast majority of burials being those of XX11 Corps (51st (Highland) and 62nd (West Riding) Divisions) from the Second Battle of the Marne (15th July – 16th August, 1918). Marfaux also brought to a close our reading of the names of all Memorials to the Missing. With a collective “Thank you”, I read the names of the 10 servicemen of the New Zealand Cyclist Battalion, inscribed on a single stone panel of the covered shelter.

Three days later, we visited our last CWGC cemetery that I considered to be off the beaten track, Courmas British Cemetery, 207. Who knows how much we have spent in vehicle repairs over the years, attempting a journey regularly carried out by the gardeners and their vehicles!

At Bouilly Cross Road Military cemetery on the same day, I was surprised to see several known and unknown 1914 burials. After doing some makeshift gardening to unearth the officer’s epitaph, I was able to photograph the headstones of two serviceman who were separated by almost four years of war, as both had died during Battles of the Marne.

It’s not possible through time constraints or budget (whatever that is!) to spend idle time. Caravan arrival and moving days fall in to this category. The cost of fuel (a fraction under 2 euros when we arrived) has caused us to question the mileage undertaken from campsite to burial grounds and would necessitate more visits with the caravan in tow and “off grid” accommodation.

We departed Epernay on Wednesday morning 25th May, en-route to Verdun (Meuse), where we were due to arrive the following day. The journey included 6 burial grounds; 3 undertaken with the caravan attached and our first night off grid. Due to the Ascension Day (bank holiday in France), it became two days off grid, the second spent in the car park of the world famous sugared almond factory in Verdun (courtesy of the very helpful Verdun Tourism Office!)

Because of lost time in Ypres, we were unable to spend the three days that I had promised Nancy at the outset of our planning. We therefore spent the late afternoon on the Quai de Londres, taking in the sun in this lovely town. After which we drove the short distance to Glorieux FNC to say “thank you” to the two British casualties buried there.

The following day we drove the caravan to three sites, en route to our next campsite, Esche sur Azelette, just over the French border into Luxembourg. The last of these was at the communal cemetery in Lonwgy (Meurthe et Moselle), where I expected to encounter a few problems with one of the two casualties. It was detailed as a “special memorial”, on the CWGC site. Surprisingly I found both headstones, side by side, in a small French military plot, tucked in to the corner of the cemetery, behind some bushes. The burial ground of the French and British graves was in a sad state of neglect; a common occurrence in many village communal cemeteries since we moved from the Ardennes!

At Mareuil sur Ay, near Epernay, I was so upset with the neglect shown to the two unknown servicemen’s graves, I contacted my friend at CWGC headquarters in Beaurains to raise my concerns. I have been told to send in photographic evidence, and the local Marie will be contacted. (Away from the usual CWGC sites, French or Belgian local councils are responsible for the upkeep of the Commonwealth graves).

We then spent three nights in Luxembourg, visiting a further 7 sites, bordering Meurthe-Moselle and the department of Moselle.

By the end of almost four weeks, we have visited 77 of 206 sites and said “Thank you” to 3,387 servicemen. Tomorrow we move to Metz before we tackle the French-German border burials of Alsace Lorraine.

“We Will Remember Them”. 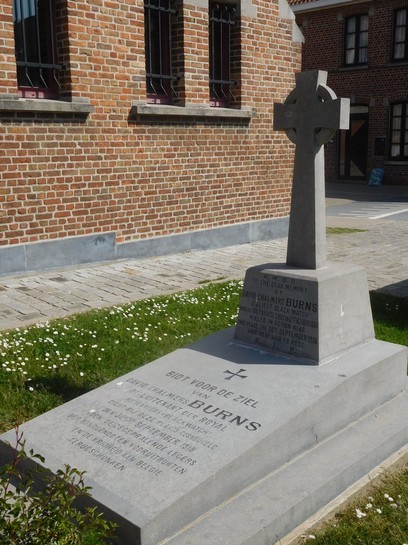 Our first visit. The plot of honour, outside the church at Slypskapelle, (west of Kortrijk) and the single grave of 2/Lt. David Burns, of the 8/Black Watch, who fell during the liberation of the town, 30th September, 1918. Born in Valparaiso, Chile, David was 19 years old. 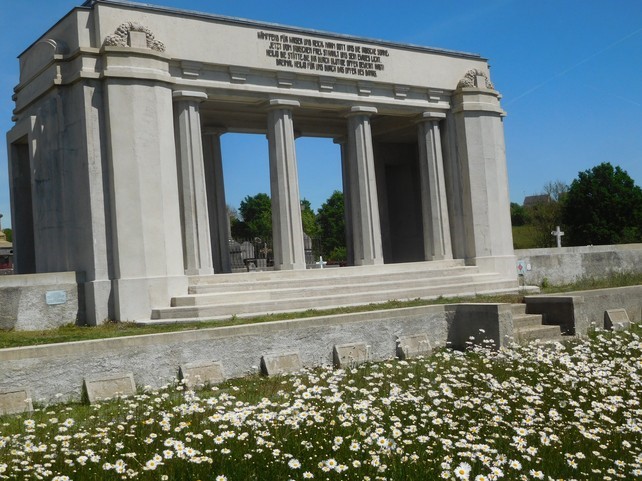 German memorial, in St. Charles communal cemetery, Sedan. Erected in 1915, when it was much more substantial in size. Given the German occupation of Sedan during the Franco-Prussian war, it seems strange that the French would allow this memorial to remain, even though there are no longer any German burials. The cemetery contains 49 British servicemen, almost certainly POW’s. 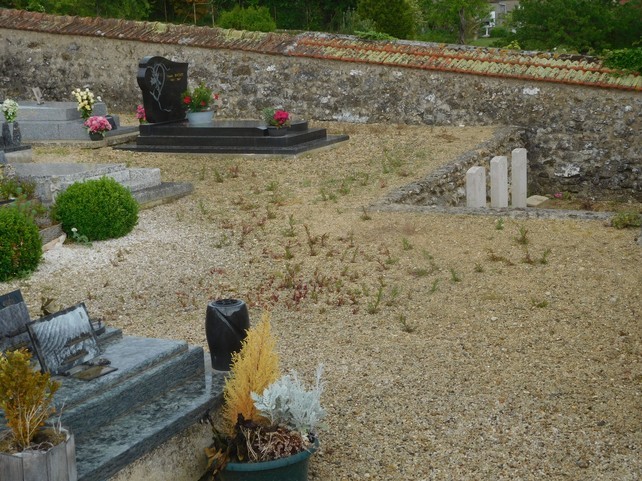 The graves of three servicemen in what I can only describe as a “pit” in the communal cemetery of Arcis le Ponsart, (Marne). The corner of the cemetery was being used as a dumping ground. Privates Nichols, Shillito (both AVC) and Sapper Picken (RE) deserve to remembered in a more dignified way than this! 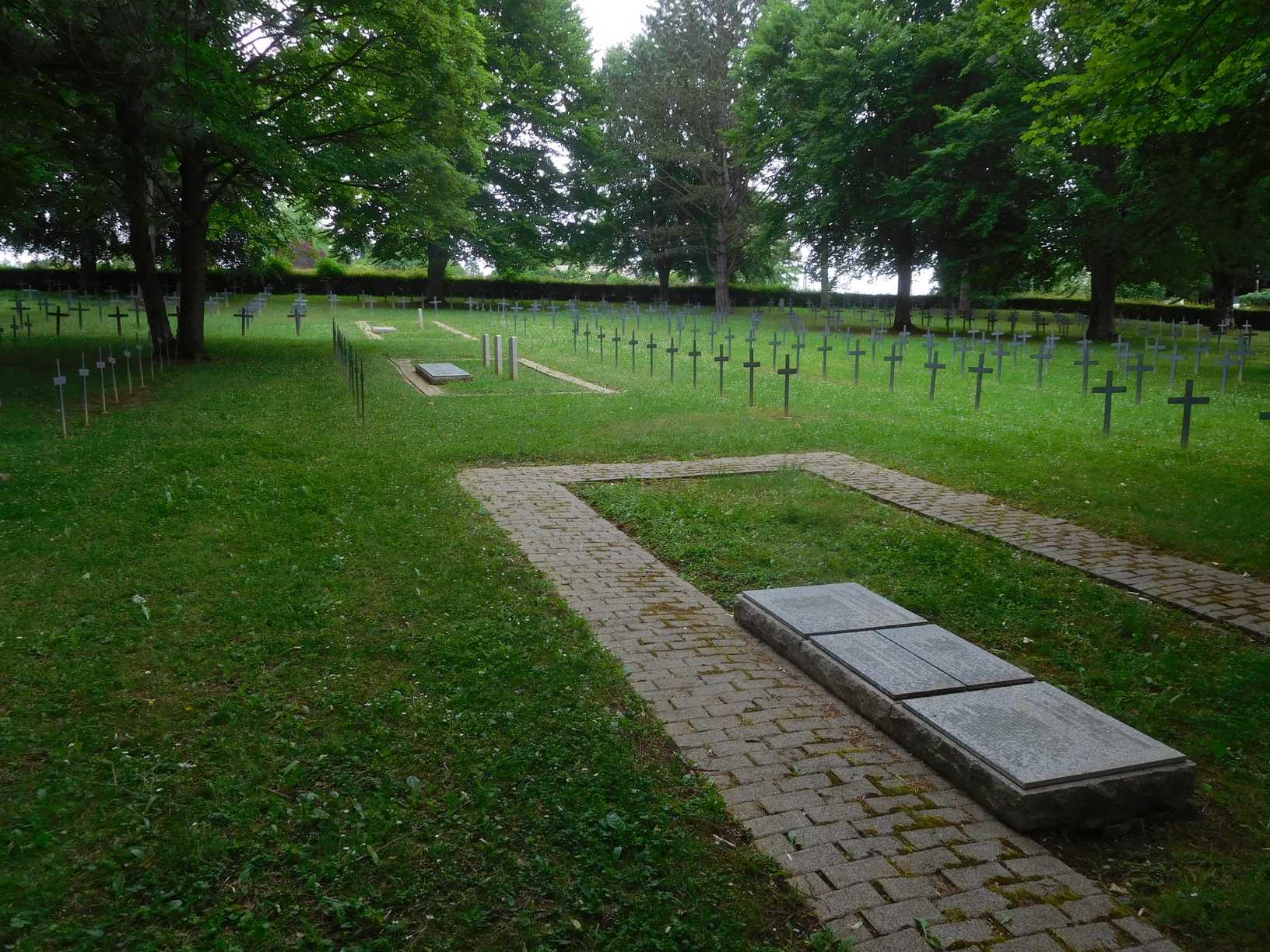 The four headstones of British servicemen erected adjacent to the ossuaries that hold their remains at Montmedy German Cemetery.