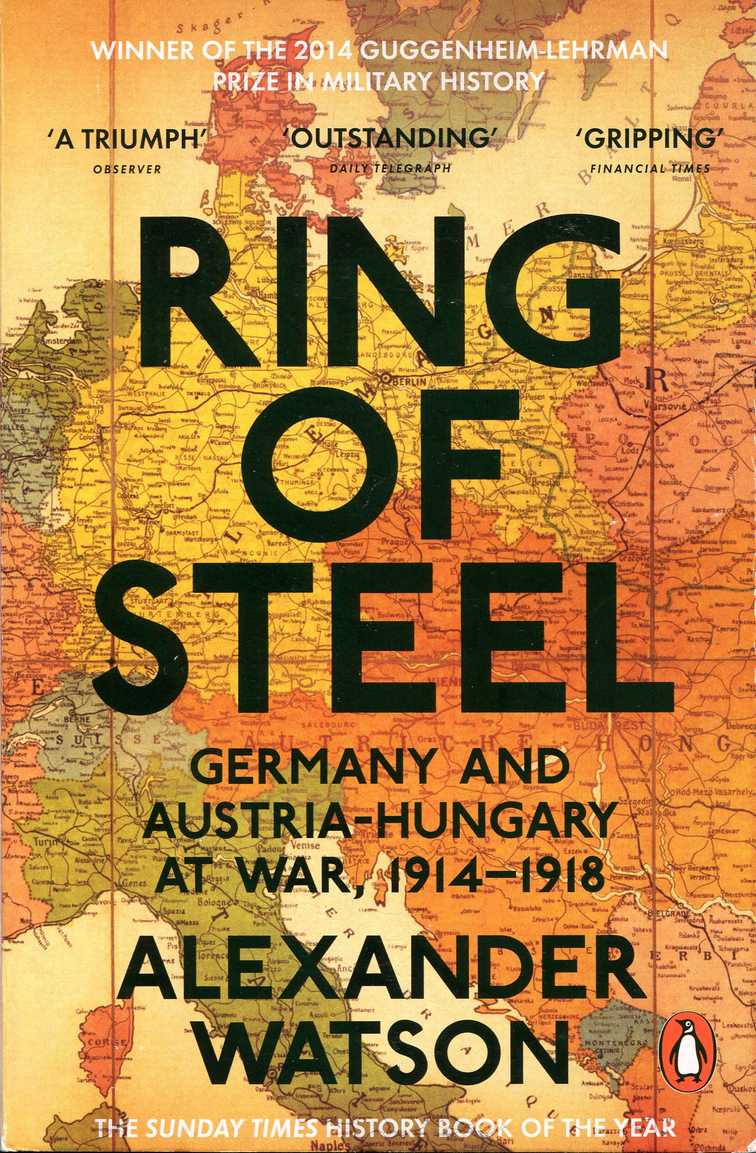 This book deals with the German and Austro-Hungarian side of WWI events. It is in English, thankfully, as most books dealing with this aspect of WWI are in German.

Alex Watson is the rather youthful Professor of History at Goldsmiths College in London. He is an excellent speaker and his writing follows that vein. His style is very readable and rather reminiscent of a journalist’s prose. This makes the book very easy to digest. It has nominally almost 800 pages, but in fact some 220 pages are references, so the actual text is 560 pages. However, it is, as I have said, easy reading. He uses maps, tables and photos to bring the text to life, as it were, which is not always the case with historical books.

The “ring of steel” of the title refers to the perceived encirclement of Germany, and of Austro-Hungary, by Russia to the East, France and Britain to the West and, eventually Italy to the South. The inclusion of analysis of the Austro-Hungarian position gives a more complete picture of the wartime events. Indeed, Austro-Hungary played a more important role than it is often given credit for. This ranges from being in many ways the cause of the war to the major battles in the East, notably the sieges at Przemsyl and the winter war in the Carpathians in 1914/15. The Russian threat to Germany and to the Austro-Hungarian Empire was in many ways diminished by these events, but at the cost of dragging Germany into more of the war in the East.

The entry of Britain is described as radicalising the war, by the use of economic means and turning it from being a purely military affair into a grinding attritional contest that assailed whole communities and turned civilians into targets. The British naval blockade is often overlooked by British historians, but not here. The effects of the blockade were felt not only by the German civilians but more so by the beleaguered Austrians who had also lost much of the agricultural area of Galicia to the Russians. Starvation of Belgian and French civilians was alleviated by a US relief programme devised by Herbert Hoover, who was later US president.

The Germans compared the British naval blockade to the British imperial regime causing the potato famine in Ireland, with about 1 million deaths, which the author points out was closer in time to WWI than WWI is to us today. The author even mentions the sinking on 10th October 1918 of the RMS Leinster, off Dublin, an event key to Woodrow Wilson’s hardened response to German approaches for an armistice (even if the more accurate death toll of 565 was not known when the book was published). This is an event often ignored by British historians.

Attacks on the civilian population are dealt with. Often books on WWI agonise over the attacks on Belgian and French civilians in August and September 1914, but here the author also describes the massacre of civilians in East Prussia by the invading Russians in 1914. However, by far the worst of these massacres was by the Austro-Hungarian army of its own citizens – the Ruthenes in Galicia of whom 25,000 to 30,000 were massacred in 1914-15, for largely imaginary acts of treason. The Jewish populations suffered also, though often at the hands of their fellow citizens. Pogroms against the Jews continued in the “new” countries such as Poland, and also Russia, well into the 1930s.

The author shows up various WWI myths, and uses tongue in cheek terminology for some of the odder aspects of the war. So, the American plan to string mines across the North Sea from Scotland to Norway to stop German submarines is described as megalomanic, quite justifiably. Ludendorff, the de facto German strategist after late 1916, is described by his nominal title of First Quartermaster General. So, the quartermaster is in charge of the army!

The issue of the losses of professional officers on the German army in the early stages of the war is analysed. It is an issue often glossed over by historians. The class system of the officer corps acted as a restraint on promoting NCOs to the officer ranks. All this combined to reduce the fighting efficacy of the German army (or, in reality, armies). The situation for the Hapsburg army was worse. Its NCO corps had been hit even harder in the early phase of the war. The Hapsburg army lost 2.7 million soldiers, NCOs and officers in the first year of the war. Age limits for service were widened and training for new recruits was shortened. Both armies suffered from young officers who were dropped into situations that they could not cope with.

The situation on the home fronts is analysed. The public mood, of course, changed over the four years of the war, from euphoria to suffering and shortage. A letter from a Hamburg lady is quoted as having in 1916 witnessed a scramble to buy meat, in which two women were killed and sixteen hospitalised. Town dwellers took to the countryside to buy or steal provisions from farms. In peacetime, Germany had depended on food imports. Now, many farm workers were in the army, or dead. Horses had been requisitioned for the army. In Austria, Vienna especially suffered. The territories of Galicia and the Bukovina were devastated after the Russian invasions. They were very important for food supply of the empire. Animal manures for use as fertiliser were reduced as there were fewer animals. Ammonium nitrate artificial fertiliser was diverted to make munitions. A fallout over supplies between Austria and Hungary made matters worse for Austria, especially Vienna.

The treaty of Brest Litovsk, between the central powers and Russia in 1917 is critically analysed, without, as the author terms it, “the breathless horror” with which the terms are often recited. In fact, it left Russia with rather more land than it has today. The bulk of the land lost by Russia was the Baltic republics, Poland and the Ukraine. In fact, the Ukraine ended up back under Bolshevik Russian control after WWI, with brutal collectivisation of farms under Stalin and 3.3 million deaths from a man-made famine.

The "unrestricted" U boat campaign is accurately described as being a failure.  Overall, increased sinkings were due to an increased number of U-boats being available.  The sinkings per U boat were only slightly increased in the North and West, and actually were slightly decreased in the Mediteranean.  A major issue for WWI U-boats was finding targets on the high seas.  The results of the campaign predicted by the realists, that is not in fact forcing Britain to negotiate and of bringing the USA into the war came to pass.  It was a disaster.

The disaffection of the peoples of Austro-Hungary and the demise of the Empire under Kaiser Karl are analysed. The Czechs and Poles gradually detached mentally from the Empire, with the ultimately successful aim of independence.

The effects of Woodrow Wilson’s apparently attractive “fourteen points” are examined. In effect, self- determination may have seemed a wonderful aim in the abstract, but Central and Eastern Europe was a mosaic of ethnic groups, living cheek by jowl. One person’s self-determination is another person’s being shoved into a new state where he is no better off than in the one he has just left. In many ways, it was a catalyst for much of the post-WWI chaos in the “bloodlands” of Central and Eastern Europe.

Overall, this book is a tour de force. It castes light into areas that have often been ignored by English-speaking historians, and gently debunks myths.