Murland: the Retreat from Mons

The BEF’s actions from Mons to the Marne

Perhaps the acid test in any book review is – would you buy this book?  Well, the answer is yes, because I did in fact buy this book a year ago and have faithfully held on to that copy.

The initial impression is of the charismatic dust jacket with the painting by the war artist Matania of the desperate artillery action at Nery on 1st September, and the action photo of the BEF being shelled on the retreat.  It is a rare real action photo from WWI.

The book, as the title implies, covers the retreat from Mons.  It therefore covers much the same topic as Robin Neilland’s book “The Old Contemptibles – The British Expeditionary Force 1914” published some years ago.  I regard them both as being good reference points for the whole topic.

Jerry Murland’s style of the writing is lucid and logical, and the book is thus very readable.  The author has been a teacher and educational consultant, and I have to say that this level of expertise in communication with an audience shines through.  I wish all books on WWI were written to this standard.  You might think this is not important, but I can assure that it is, as it turns reading a book from a drudge which you suffer because of the information you may glean into a “can’t put it down” delight. 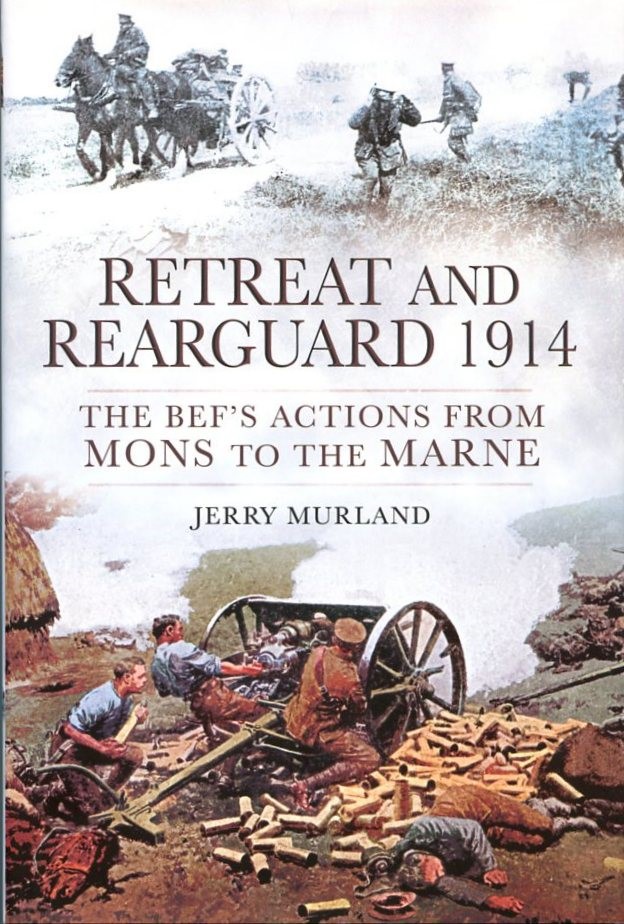 Mons itself is, of course, an engagement that is shrouded in what might be called mystique, contemporaneous propaganda or twaddle, if you are being unkind. This book serves to cast more light on the events of August and September, in so far as they can be discerned a hundred years or so later, including by looking at original material such as letters, diaries and personal accounts.  These help to personalise the narrative and bring it down to the human level.  An extract from the diary of James Pennycuick at Mons refers to a conversation with Maj Gen Sir Charles Ferguson on 22nd August where Ferguson says they may be in Mons for a week or two – the entry refers to a “very short fortnight”.  Well, indeed.  The Battle of Mons, of course, started at 6am on 23rd. In elucidating matters generally, the book refers to German casualty figures which do seem more plausible at Mons and Le Cateau than previous British accounts.

There are similar personalised accounts of the actions on the retreat – Le Cateau, Le Grand Fayt, Etreux, Audregnies, St Quentin and Nery.  Le Cateau is covered in a number of books, including by the late Richard Holmes.  An important feature of the Murland book is the use of sketch maps, especially in the case of the various skirmishes and rear-guard actions following Mons and Le Cateau.  These help to explain those encounters for the reader so that he or she can understand better the geography of the location, the deployment of the various units, and what happened.  As I said, the author has a track record as a teacher.

One aspect that appealed especially was the extracts from the dairy of Edward Spears who was a lieutenant and a British liaison officer with the French in General Lanrezac’s headquarters and which make wonderful “fly on the wall” reading, especially on the strained relations between Generals Lanrezac and Sir John French. Lanrezac did not like the British, and in turn Sir John was held back by his limited knowledge of the French language – yes, French could not understand French! Lanrezac was replaced on 3rd September by Franchet d’Esperey.  Sir John was given something of a “talking to” by Kitchener on 1st September to get him back “on message” and to stop asking for the BEF to be withdrawn to be re-equipped and reorganised.  Things improved after that.

The book concludes by referring to the creation of the Munsters’ cemetery in the orchard at Etreux in 1921, with the words:

“…with the centenary of the start of the Great War fast approaching it is fitting that we should remember this and numerous other gallant actions of the BEF as it fought to remain intact and stay in the fight in the face of a relentless pursuit by an aggressive and determined Germany Army almost a century ago.”

I can only agree.