Captain Henry William Hughes was a career merchant seaman, described as a ‘Captain’ on his family grave, he is remembered as 1st Mate on official memorials.

He was the son of Capt Thomas Hughes of Bryn Hyfryd, Tynygongl and his wife Elizabeth. It seems that he followed in his father’s steps in the Merchant Navy, so he will have been a very experienced seaman by the age of 48. He was born at Dinas, Llaneugrad; his family lived at Brynhyfryd, Llanfair-Mathafarn-Eithaf, usually known as ‘Llanfair M E’. He was married to Mary Hughes who ran the Post Office at Trevor, near Chwilog.

The Cymrian is described as a ‘defensively armed’ cargo boat; it was carrying coal from Newport in Monmouthshire to Dublin. It was off the coast of Ireland, near Wexford when it was torpedoed by U Boat 75. The Cymrian was hit amidships and sank almost immediately with 10 crew lost. Those who survived were firstly questioned by the U Boat Captain, S Lohs, before being taken onboard the Russian steamer Odessa and landed in Larne, Northern Ireland. Another of those lost from the Cymrian was John Rowlands age 19, from Trevor Caernarfonshire, very close to where Henry lived. John Rowlands was a nephew to Henry Hughes.

Another part of the story which I found on an internet chat room was that after they had been hit, John Rowlands went back into the ship to rescue his uncle. Sadly both of them died. The CWGC records say: ‘Drowned, as a result of an attack by an enemy submarine’, 25th Aug., 1917.

The National Museum of Wales, in its Online Collection, shows a painting of the SS Cymrian entering Bristol Docks. It was painted by Terry F J Rogers, who had served with the Royal Navy in the Atlantic and Arctic Convoys of WWII. 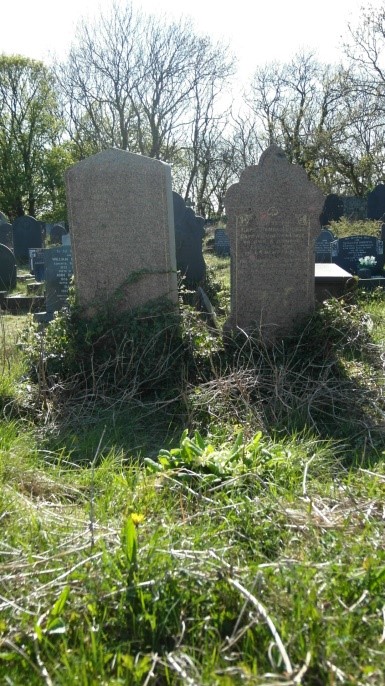 The War Graves Photographic Project: he is commemorated on the family grave in the Churchyard of St Aelhaiarn, Llanaelhaiarn (Llanaelhaearn)

Photograph of family grave in churchyard of St Pedr, Llanbedrgoch, courtesy B Geoghegan