Why was there a WWI? Pt 2 Background

Let us look at some of the chronology of the key events leading up to 1914.

In 1898, there was the Fashoda incident which was a stand-off between British and French troops in what is today the South Sudan. Kitchener’s diplomatic handling of the affair prevented a colonial war between the French and the British. This ultimately led in 1904 to the Entente Cordiale, which was an agreement by the two countries to carve up Africa between them.

In 1905, there was the first Moroccan crisis, which lasted 14 months. Contrast this time period with the short duration of the summer crisis of 1914 – little over one month. The German Kaiser visited Morocco ostensibly to show his support for the sultan, but in reality because Germany was irked at being left out of decisions made by Britain and France when they carved up colonial interests in Africa. He wanted to drive a wedge between them, but the result was the reverse as both countries became more concerned about German intentions. The Moroccan issue was settled by the Treaty of Algeciras in 1906 which guaranteed free trade with Morocco whilst recognising French hegemony. (France breached the treaty in 1911 and created a second crisis.)

In 1908 – Austro-Hungary annexed Bosnia-Herzegovina which they had been administering since 1878. Ottoman Turkey was too weak in the Balkans to do anything about it.

In 1911-12– Italy invaded Libya, which was an Ottoman province, to make it an Italian colony. The Italo-Ottoman war showed how weak the Ottoman Empire was. In effect, this war upset the balance of power of the era, and unleashed nationalist sentiment in Italy which pervaded Italian politics in the following decades. (This war is reputedly the first use of an aircraft to drop a bomb, actually a hand grenade).

In 1911 – there was a second Moroccan crisis, which lasted seven months. It was caused by France putting troops into the country in breach of the Treaty of Algeciras. Germany reacted by sending a rather insignificant naval vessel, the “Panther”. The whole episode ramped up tensions between France and Germany, and between their allies. It was settled by a trade-off of territory in that Germany was given some land from the French Congo, and Spain and France renegotiated the Moroccan frontiers.

The two Moroccan crises crystallised the power blocks in Europe with Britain, France and Russia on one side, and Germany with Austro-Hungary and Italy on the other side.

In the UK, the paranoia caused by the Moroccan crisis of 1911 was such that the government pushed through a new Act of parliament in just one day – the Official Secrets Act 1911. This law lasted until 1989, when thankfully its sweeping terms were replaced by something more workable.

We have already alluded to the two Balkan Wars but just to be clear what happened:

In 1912 the first Balkan War broke out when Serbia, Montenegro, Bulgaria, and Greece pushed the Ottoman Empire out of the Balkans. This war was ended by the Treaty of London. (Bosnia-Herzegovina had been under Austrian rule since 1908 in any event).

In 1913, Bulgaria tried to snatch territory from its former allies and was also opposed by Romania and Ottomans. Not surprisingly, Bulgaria lost miserably and ended up with less than under the original treaty. This second war was ended by the Treaty of Bucharest.

The result of the Balkan wars was an expanded, aggressive Serbia on the southern border of Austro-Hungary – see below for Archduke Franz Ferdinand’s views on the threat to the Austro-Hungarian Empire in the Balkans.

The Serbs were Russia’s last ally in the region. The Russian support for the Serbs was driven by Russia wanting a naval base on the Adriatic, which would be a warm-water base. This was not to the liking of the other powers, including the British, as the route to India was through the Mediterranean and the Suez Canal, a route which the Russians could disrupt from an Adriatic base. So, in 1913 a peacekeeping force was put into Albania to stop the Russians and the Serbs. In particular, the peacekeeping force occupied the port of Scutari. The British component was two companies the West Yorkshire Regiment with a 42 piece band, and 250 Royal Navy personnel. There were also contingents from:

What next? The Balkans were clearly a powder keg waiting for a spark.

11. The 19th century views of France and Germany

In fact, France was thought to be the former, as it was the country of Napoleon, and Germany the latter!

In 1830, in the aftermath of the Napoleonic wars, Belgium was created by the Great Powers as a bulwark against the French going eastwards, again. It was designed to be a political chess piece.

Napoleon had simplified the German states, which were just that – a myriad collection of small states. Modern Germany came about partly as a result of the brief 1866 war with Austro-Hungary, after which Austria was excluded from Germany. This left the Austro-Hungarian Empire as only 35% German.

The Franco-Prussian war of 1870-71 resulted in Alsace and Lorraine changing hands, as they had done before in history. However, the French regions of Savoy and Nice were only acquired by France in 1860, from the king of Sardinia (Italy). Clearly, areas of land were swapped by the powers of the day, so was the loss of Alsace and Lorraine quite the big deal that it is made out to be?

France had been waning in terms of power and influence for much of the period after 1815 and had had much internal turmoil. By the late 1800s and early 1900s, it was reasserting itself on the world stage.

Up to the 1870s, Britain regarded the two countries thus:

12. The sick man at the heart of Europe – Austro-Hungary

One of the questions of 1914 is why Austro-Hungary still existed. It was an anachronism. The answer is that everyone feared the power vacuum which would result from its collapse. This fear was entirely justified and came to pass in the years after the end of WWI. 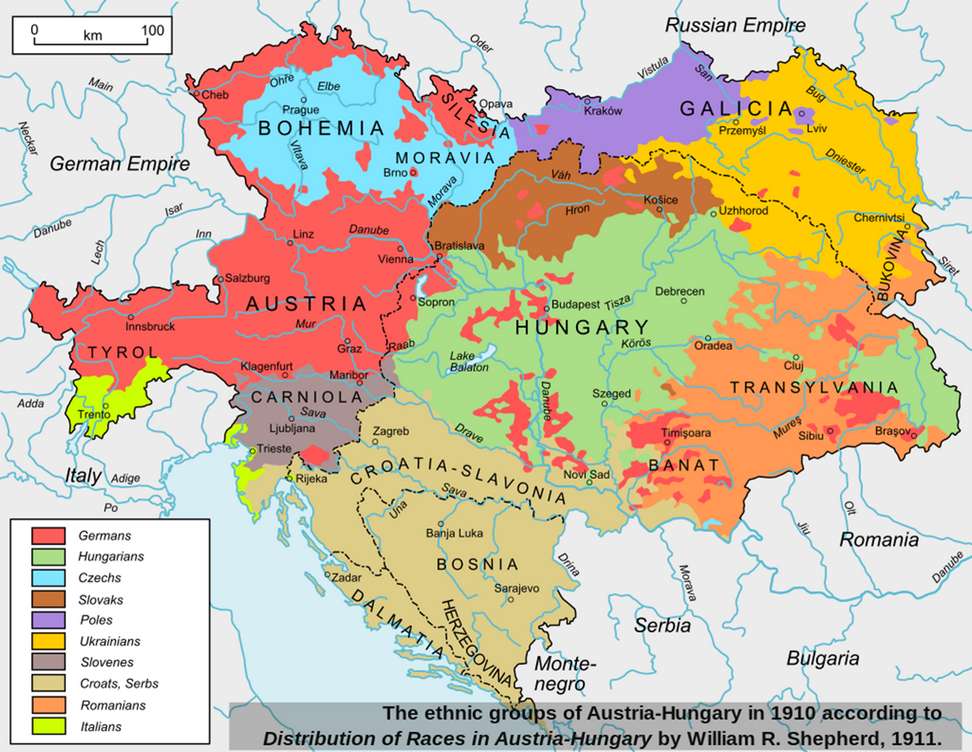 Kaiser Franz Joseph had been in power since 1848, when he had been installed at the age of 18 to replace an emperor with mental difficulties. He was indecisive and conservative. He was 84 years old in 1914. The royal court was very hidebound by tradition and protocol.

Austro-Hungary was very far from being a democracy. Parliamentary bodies had no power. The empire was comprised of 12 nationalities, and was split into “Hungary” and “the rest” from 1867.

There was a “Dual monarchy” – Kaiserliche u. Königliche, that is imperial and royal. Kaiser Franz Joseph was the monarch of Austria and Hungary.

The religions of the Empire were Roman Catholic, Protestant, Greek Orthodox, Greek Catholic, Judaism, Sunni Islam. (Greek Catholics use the orthodox liturgy but recognise the Pope, not the Patriarch, as head of the church).

Politically, only Hungarians and Austrians had any real power. This was clearly a problem waiting to come to a head. This was recognised by the more astute in the Empire, including Franz Ferdinand. The big problem was to find a solution and get it accepted by those in power, including the elderly, indecisive Kaiser Franz Joseph. One type of reform which was suggested was a three-way split “Trialism” but how do you divide up Austro-Hungary? Popovici suggested a federal system (1906). This would have resulted in 15 states - not enough to account for all the ethnic enclaves, not least as one is dealing with very mixed populations and enclaves of other nationalities within enclaves. Incidentally, a copy of Popovici’s suggested system exists today in the study of Franz Ferdinand in the castle of Artstetten, near Vienna, so he was certainly interested in it.

However, there was no new internal structure for Austro-Hungary by July 1914. This gave a power base to independence movements, violent or peaceful. 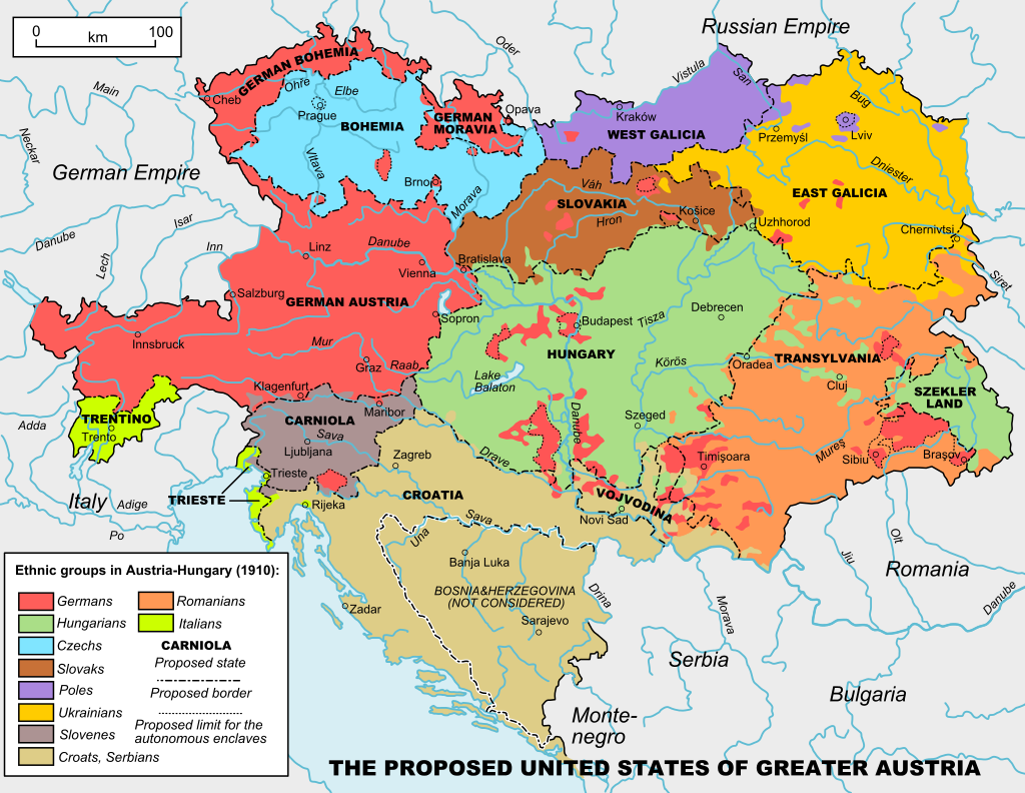 Popivici's suggested "United States of Greater Austria", with the problem of ethnic enclaves within the states